First, a word to the morons killing online music: most of the music I buy I only purchase because I've spent quality time with the bands on sites like Playlist and (sadly deceased) Lala.  If you stop making the music available for me to get acquainted with, I won't buy it.  Are we clear?  Probably not, but at least I tried.

Now that that's out of the way, let's get on to the kerfluffles.  You should all be reading Pharyngula, but in case you're not, you really must read this post about Chris Mooney's epic pooch screwing.  I have only one comment, and it is this:

I've thought of Chris Mooney, veteran of the (losing side of the) framing wars, as a complete and utter moron for some time now, but my opinion of him just went sailing off into the cesspool.  Before that, it had just sort of been staining the toilet bowl, but as my regular readers know, I've been indulging in a little heavy house cleaning lately.  Even friends and comrades like Orac have about had it with his antics.  It's too bad Orac's off to TAM8, because I would've liked to see his reaction to this choice bit of supreme idiocy.  And do keep in mind, Chris Mooney likes to think of himself as a journalist, lords it over everyone, assures us he checks his sources, and yet got pwnd by a sockpuppet.  When we talk of people going down in flames, burned alive by their own hubris, it's rarely on the scale of the Hindenberg.

Oh, Chris Mooney.  You may not be good for much, but you surely keep me entertained!

In other kerfluffle news, ScienceBlogs stepped deep in the brown and sticky, and I'm not talking about spilled Pepsi, although it all started when they decided to spring a blog written by PepsiCo employees on the ScienceBlog world without announcing that it's basically just long-winded advertising.  Our own Blake Stacey, along with several other Sciblings, has quit the site over the episode.  So, a word to the ScienceBlogs overlords: no matter how much cash a corporation hands you, it does not make up for shitting all over the writers who actually bring people to your site.  You're lucky you're hanging on to some of your science bloggers this time round - another tone-deaf corporate money-grubbing fuckup, and you're sunk.  Do you really think folks are going to flock to a site that offers only blogs written by corporate shills?  If that were the case, Pepsi wouldn't be bothering to pay you.  They'd host their blog on their own damned site.

And as for those who are claiming that people in the pockets of the corporation can write without undue bias, let me just share a few pertinent phrases: job security, dismal job market.  Need I say more?  That's the reason I do not say one single, solitary word about my corporate overlords, good or bad - although I'd love to.  Not going to risk my job, nosir.  Need the cash.  And that's just my little bit of self-censorship on a personal blog.  Do you imagine Pepsi will allow any of its more honest scientists to blog on their very own bought-and-paid-for corporate blog?  No.  They'll have chosen those who are best at kissing the corporate arse.  If you want evidence, look no further than the fact they're moderating comments - if they're happy to censor their readers, they'll have no trouble at all muzzling employees.

I have better things to do than read endless paens of praise to the company line.  Besides, while I drink Mountain Dew during the day, I'm a Coke fiend after work and on weekends.

As if that weren't enough kerfluffle for yer, there's also the fact that HuffPo has jumped an entire ocean of sharks.  They've got IDiots on their payroll now.  And if any of their few remaining honest bloggers dares to question their authority, those offending passages are duly removed (h/t PZ).  Salon's Alex Pareene says fuck 'em and our own John Pieret seconds - motion fucking carried.  I rarely visited even the political side of their site, which has a few things to recommend it (such as Sam Stein), because of their propensity for spewing woo, but this is a bridge far too far.  I hope the legit journalists and bloggers find homes elsewhere, because I won't be seeing them there.  Let HuffPo rot in its own sewage.  Don't want or need to hang out near stupid "liberals" when I get enough of that kind of dumbfuckery from the right wing noise machine.

Elsewhere, Bing at Happy Jihad's House of Pancakes has a great post up about the Doctor's Data debacle, concluding with a wonderful suggestion:


Scott Silverstein has identified this as a clear case of a SLAPP suit and recommends that you use Senator Grassley's whistleblower hotline (whistleblower@finance-rep.senate.gov) and let him know about this legal intimidation.

Oh, to use a Con's very own creation to whack Doctor's Data!  Too awesome.

Bing had this earlier, which I'd missed because I was elbow-deep in cleaning products:


I'm asking both of my readers to contribute $10 to the Quackwatch defense fund. I'm also asking you to write on your own blogs about this and include Doctor's Data in your tags, linking the phrase to Quackwatch's article, "Doctor's Data Facing Multiple Lawsuits." By taking this frivolous and ultimately doomed action against Quackwatch, Doctor's Data has already begun to displace themselves from the first page of Google searches for the term. Good. Fucking morons.

In case you're still in the mood for some controversy after all that, don't miss Bing's post on the depths to which Ken "Humans Rode Dinos but PZ Can't" Ham has descended.  Interesting that he felt such an overwhelming need to creatively edit the Copenhagen Declaration, inserting words represented as we atheists' own which we never spoke, innit?  Somebody must be skeered of them mean ol' atheists.

After all that sturm und drang, sure would be nice to have some good news, wouldn't it?  Bing's got that, too - we've got our first photo of an extra-solar planet! 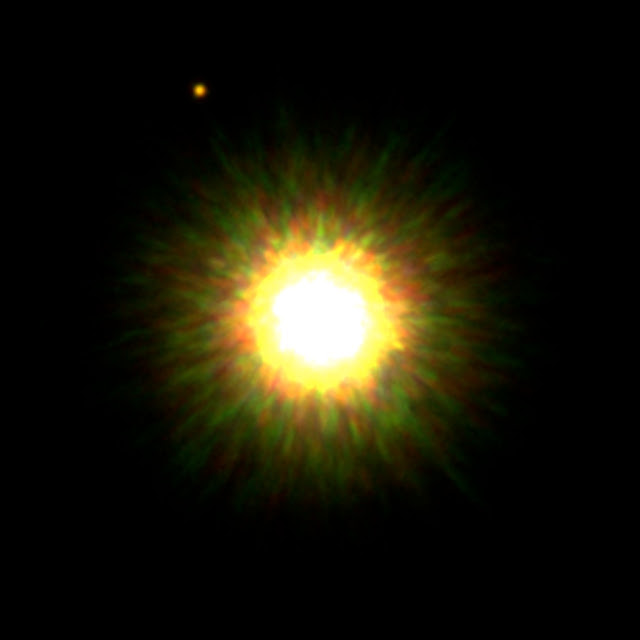 He snagged that from Astronomy Picture of the Day.  I don't think there's ever been a picture more worthy of the title.

Right, then.  Now that I've cleared all that from my system, I think I shall go enjoy my fully-clean house.  Adventure tomorrow, and then I promise I'm going to get the next in our Oregon geology series up and actually email some of the long-suffering people who emailed me ages ago.  If it helps, I think of you and feel guilty every day...
Posted by Dana Hunter at 1:43 AM