I was going to write something substantive on the earthquakes cracking ScienceBlogs apart, but fuck it.  I'm too tired to think.  I shall just babble about today's adventures instead, and you can all enjoy some pretty pictures before we return to the wielding o' the Smack-o-Matic, pontificating on ye olde exodus, and eventually really seriously I promise the next installment of Oregon geology.  And for the geology-deprived, there's rocks below the fold!

I'm suffering the dregs of this summer cold, so we took it easy and stayed in the neighborhood today.  We went to Ruby's Diner for lunch, and I have it on good authority that the American Kobe beef burger is very tasty indeed.  You can't take my word for it.  The bits I could taste seemed pretty good, and the texture was awesome, but considering I didn't realize there was black pepper on it until a stray tastebud kicked to life over halfway through the meal, I don't think I can accurately report on its awesomeness.  So maybe you'll just have to come up here and have one of your own.  I'll take you myself, even.

After Ruby's, we headed down to the Sammamish River for walkies.  There's a nice stretch that runs by downtown Bothell.  I shared a few pictures last year, but you'll get far more this time.  Plus, bebbe duckies and the moon!  So do follow me after the jump. 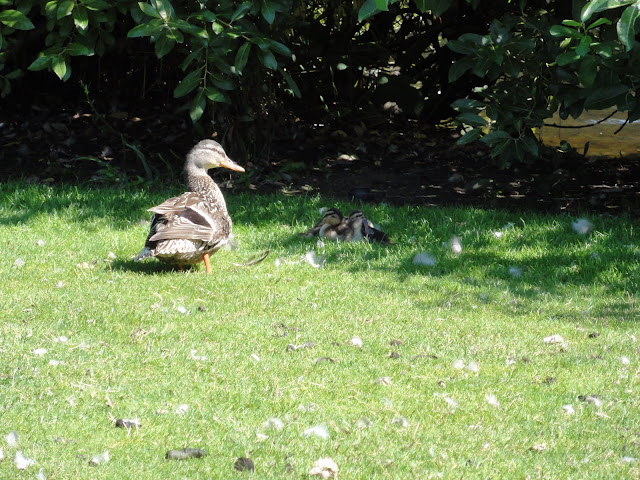 This was taken at a park you reach by crossing the bridge, and suddenly you've got a mini-ampitheatre: 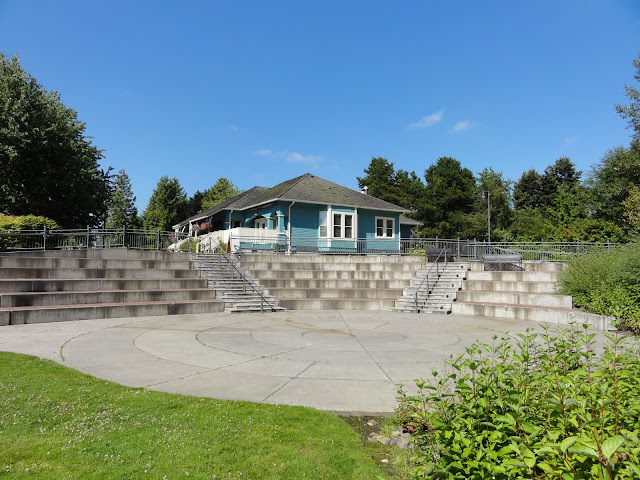 I have no idea what they use it for, and it's about to get a lot noisier, because apparently they're going to route the 522 right by there now.  Urgh.  But for now, it's a neat, peaceful little place filled with historic buildings you can peek into.  My handheld twilight mode got a chance to strut its stuff, and how.  Check out the interior to the Andrew and Augusta Beckstrom Log Cabin: 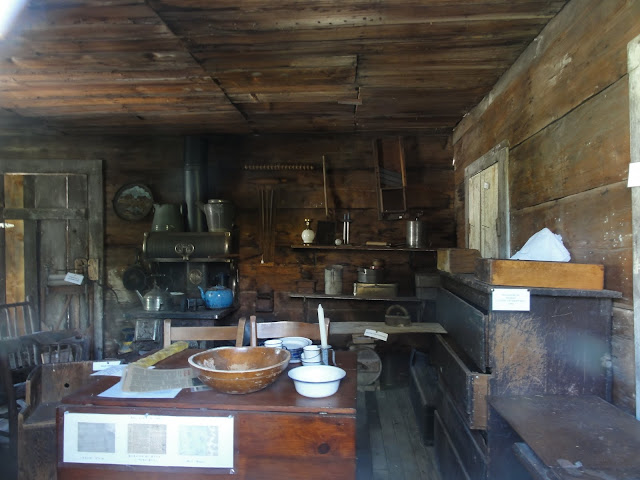 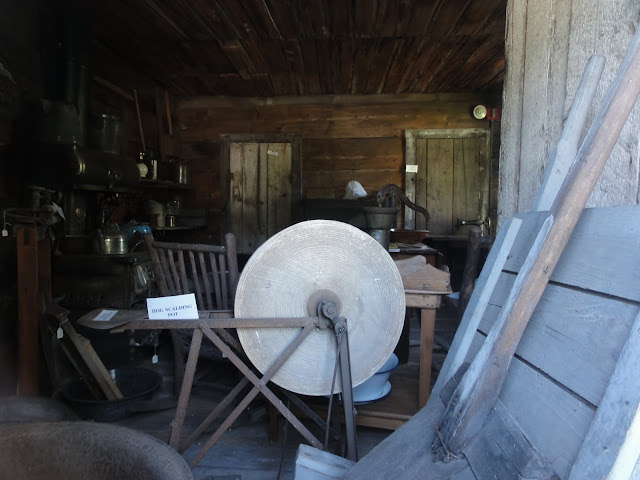 Hog Scalding Pot.  I love it.  And I love the fact these came out so well, since they were shot through tiny windows, and the only light is coming from other tiny windows.  Mind you, what was visible to me was just a lot of shadows and blotches.  So, yay!

My poor camera was rather less happy looking into full sunlight from shade, and the sky had a lot too much water vapor in it scattering light, but it did a good job with the cabin itself: 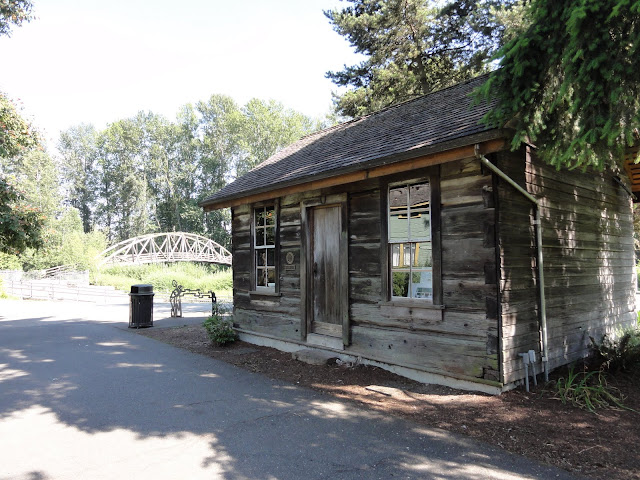 I also know there's some trick to getting the backlight correction mode to function supremely well in these conditions, but I haven't learnt it yet.  Perhaps I should go to school: 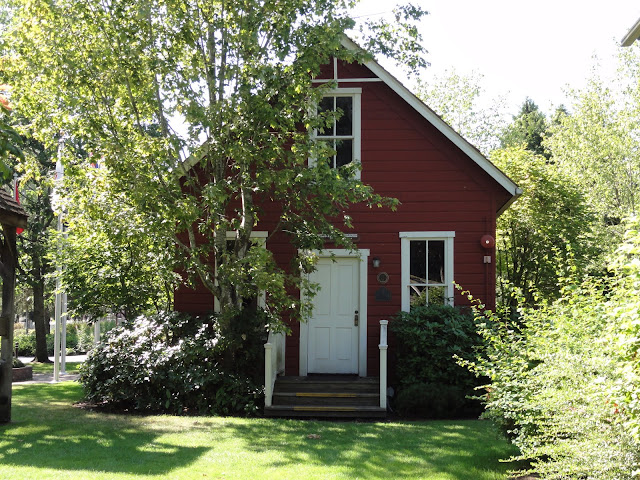 Oh, yes.  That is the stereotypical little red schoolhouse, and it's the actual first schoolhouse Bothell ever had.  It's over 200 years old.  It's all lovely and restored and the handheld twilight adored it: 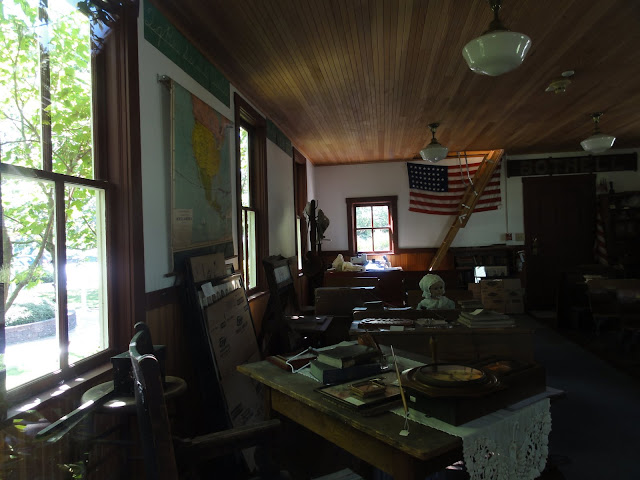 I don't believe a lot of the things in there are authentically 1885, but no matter.

We met a lot of the local wildlife, from sleepy, stretchy ducks: 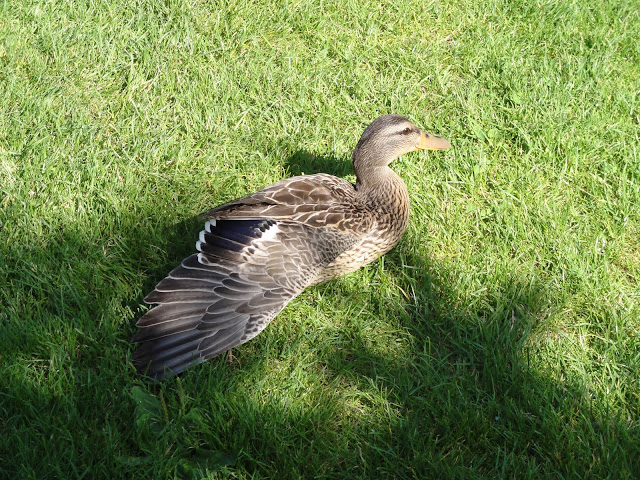 To geese getting ready to swim: 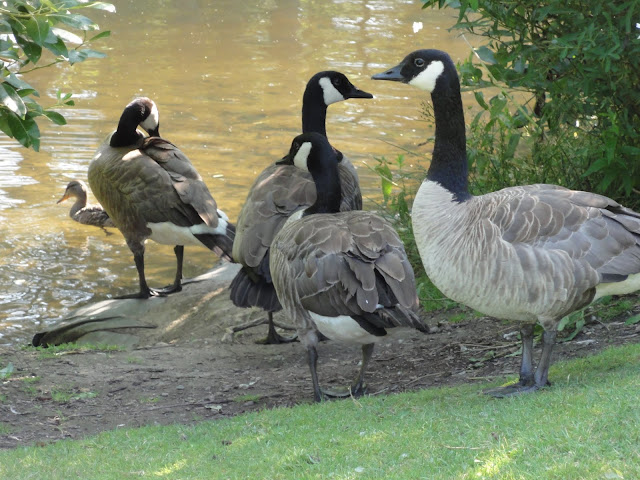 To - wtf is this chicken doing here and why is it stalking us?!? 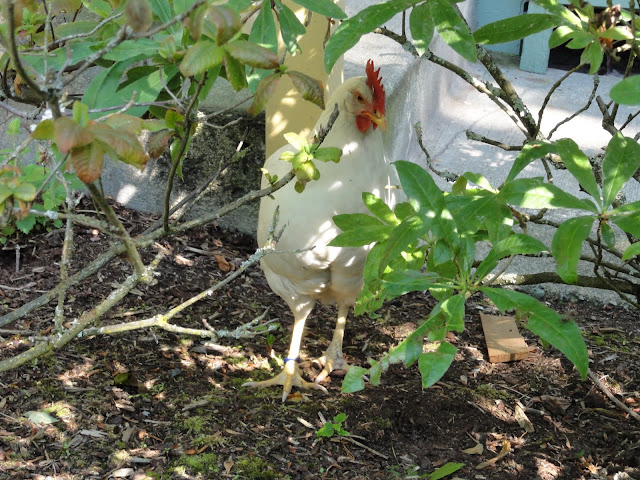 And he did, too.  He followed us around for quite a bit before we left his butt behind.  No need to ask why this rooster crossed the bridge, because he didn't.

But before we cross that bridge ourselves, you really must enjoy the ginormous lilac bush by the river: 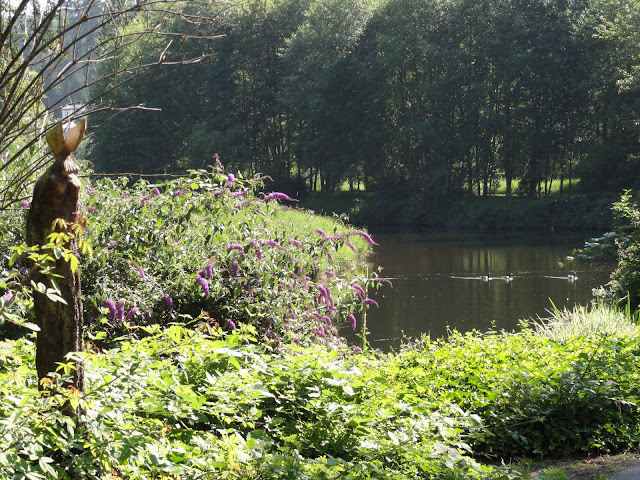 The bits of it I could smell did indeed smell wonderful.  It's a very relaxing spot, and if you're ever kicking around Bothell, I recommend it, even if you do risk getting stalked by random roosters.

Across the bridge again, there's a spot where the local waterfowl congregate to get a free meal from passers-by.  This Canada goose is apparently digesting: 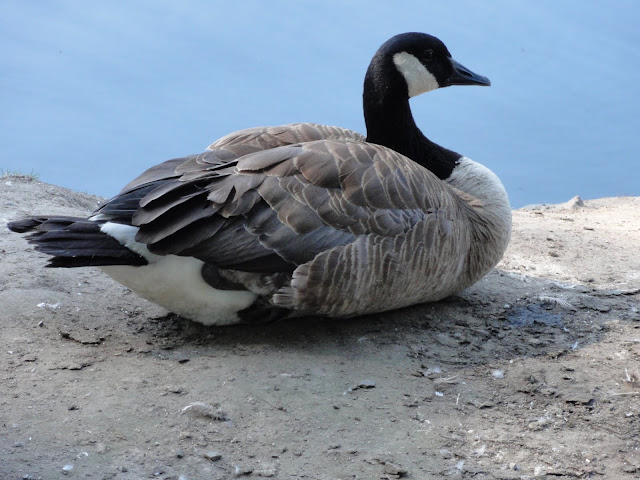 They're really lovely, even if they do get aggressive sometimes.

Further along, the morning glories were in bloom.  With ye olde camera, all I would've gotten was a white blotch among green blotches, but with the Sony Cyber-Shot, I actually get a flower: 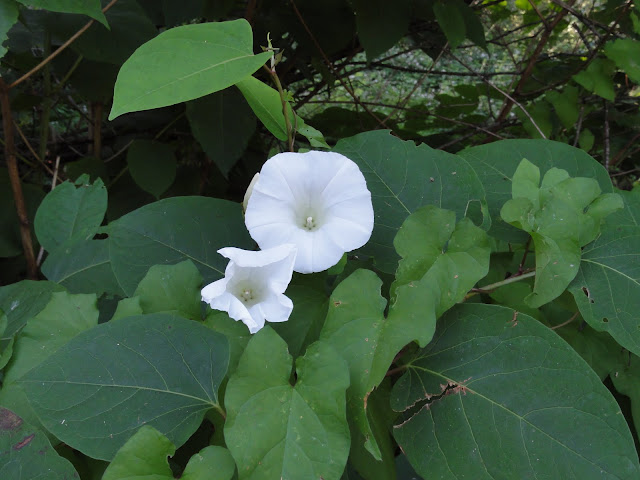 And there's another bridge to cross: 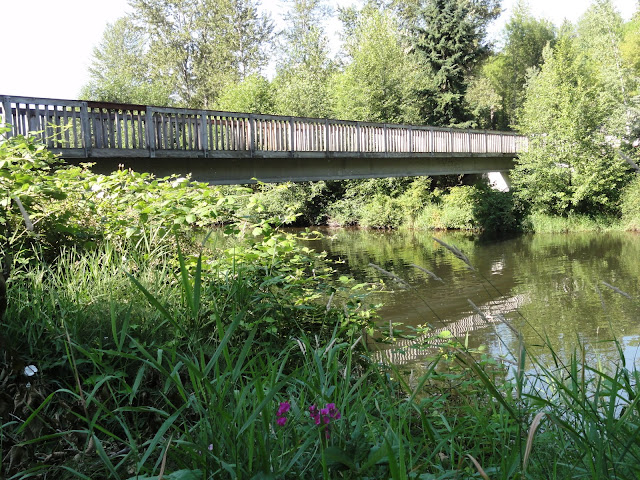 And then you walk up a short stretch of trail to the fork where the Burke-Gilman Trail intersects, and this is where mah geologist's heart goes pitter-pat.  You see, there's this embankment sort of thingy lined with boulders, and they have the most wonderful inclusions.  I lost myself amongst them the last time I was there, and this time was no different.  Thankfully, my intrepid companion is amenable to such things, and he had a tunnel to play with: 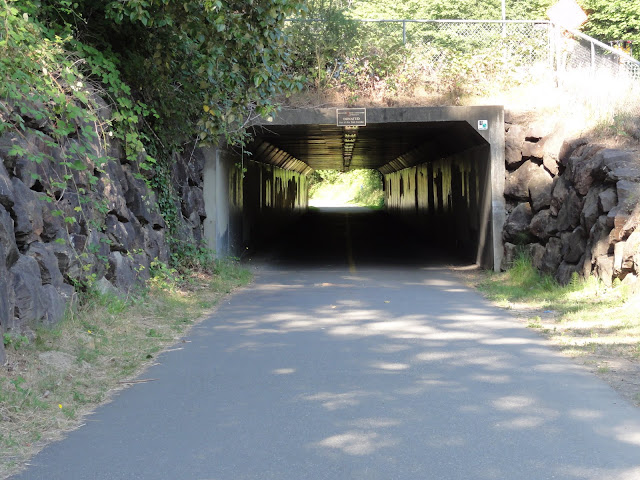 I shall now do my best to identify some inclusions.  Karen can correct my rank amateur mistakes.  Here, I believe, is feldspar: 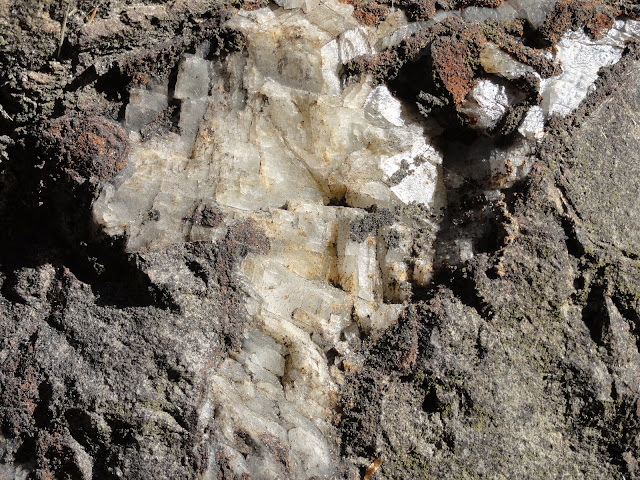 This appears to have formed within an andesitic lava, as far as I'm able to determine. 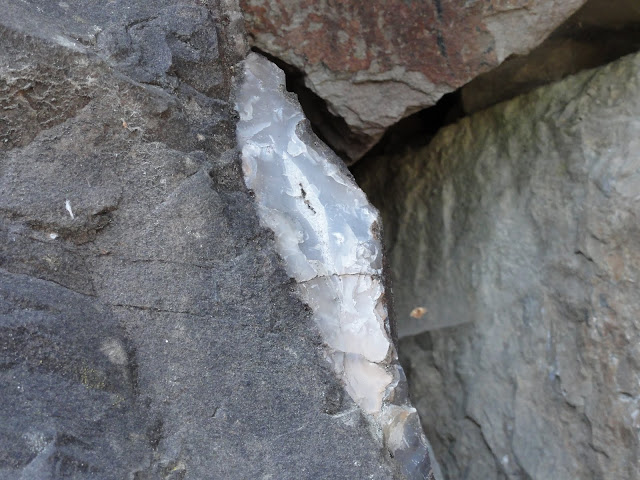 You can see the rock weathering away from it.  At some point, that will be a nice specimen all weathered out.

This next bit is probably also agate, but it looks a lot like opal, too: 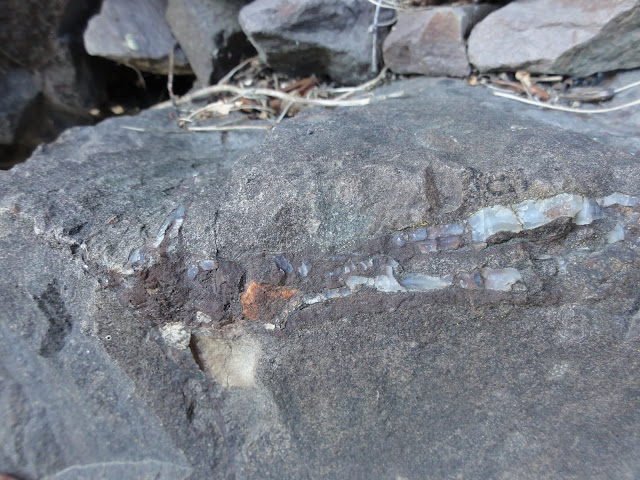 I suppose it's possible.  Opal's a mineraloid gel that gets deposited from silica-rich circulating water, and where there's lava, there's possible hot springs and suchlike that could carry the stuff around.  But this might be just particularly pretty agate.  Hard to tell when one's far from an expert.

These rocks had to have been in an environment where there was a lot of circulating, silica-rich water, because nearly every crack and crevice is filled with veins of the stuff: 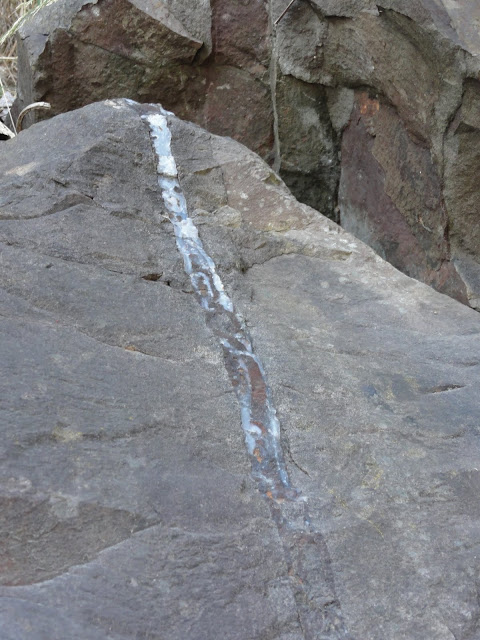 Some of those strips get very wide indeed: 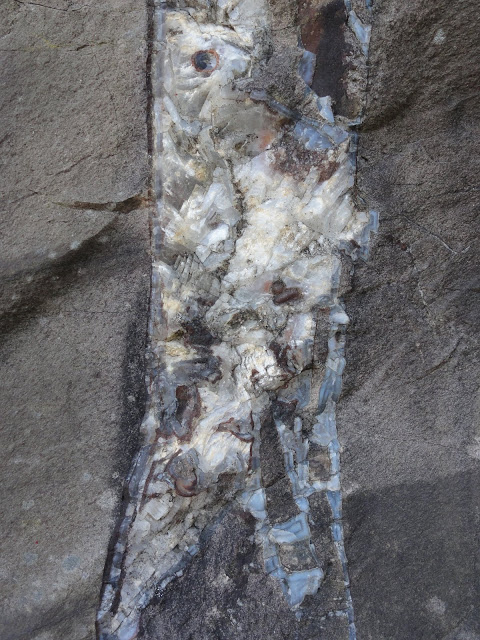 How wonderful is that, right?  Rocks can be pretty!  Like this nodule, which I can't quite pin down: 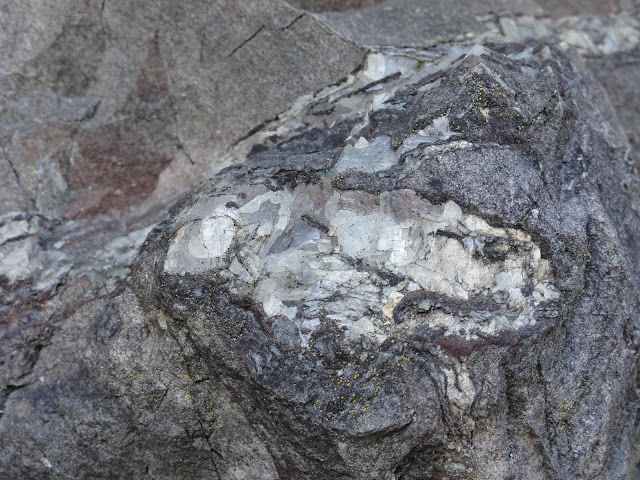 Mmm, lovely wonderful rocks!  And my intrepid companion's becoming quite the rockhound.  He found some specimens weathered out that I'd completely missed, small enough to take home.  He has my undying affection for many things, but the fact that he found the hand-sized bits with inclusions that I'd been looking for ranks high on the list.  And there's a lovely little piece with some very brilliant blue bits in it - but I'll stop babbling about rocks, now.  Needless to say, if you ever want to have a good look at andesite and welded tuffs with wonderful deposits, all you need to do is wander the bit of the Burke-Gilman Trail where it meets the Sammamish River Trail, and you shall be a happy rockhound indeed.  You can even amuse yourself playing with puzzle rocks there: 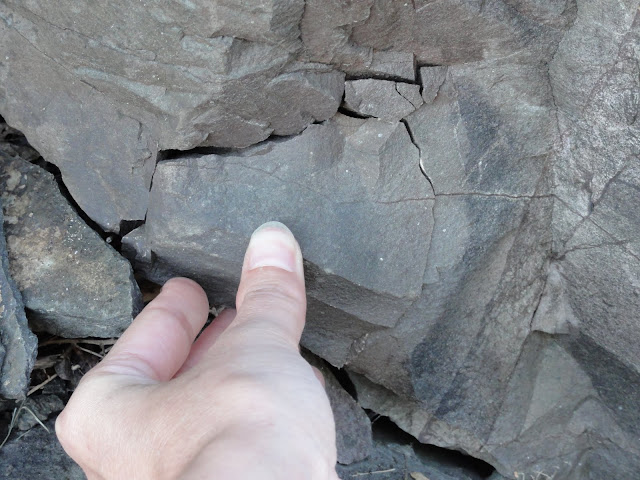 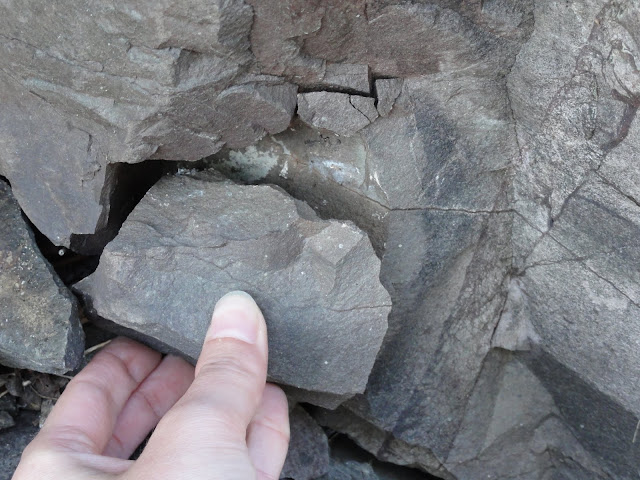 There's some excellent examples of weathering there, including rocks that are splitting into flat planes, almost like shale.  I believe some of it's welded tuff, fracturing along the layers.  Seemed that way, at least.  And then there was this bit, which amused me because it looked a little like a Cylon raider: 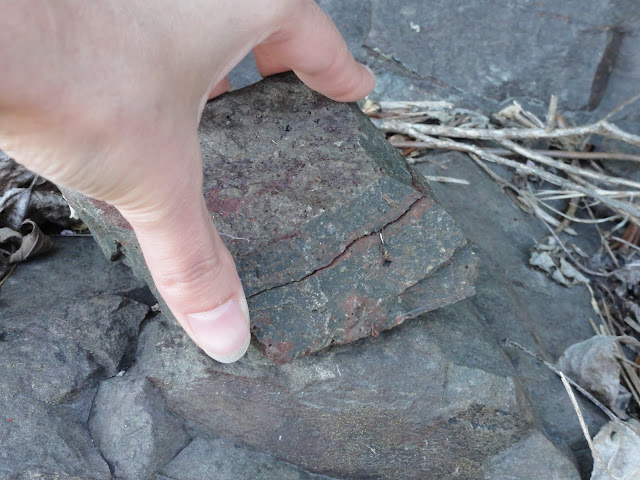 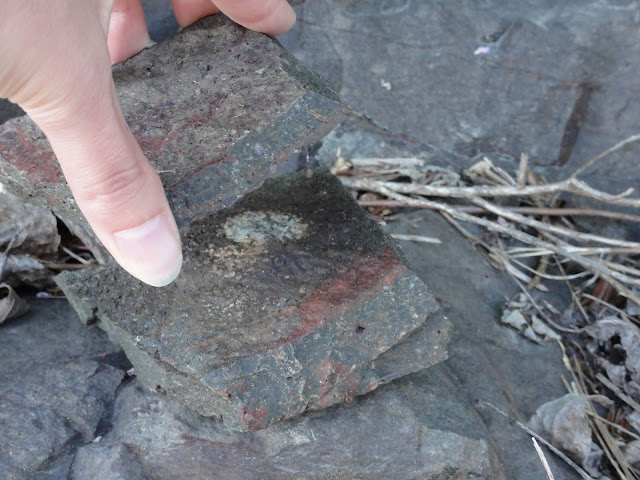 After you've perused the boulders and amused yourself with the weathered bits, you can cross the trestle: 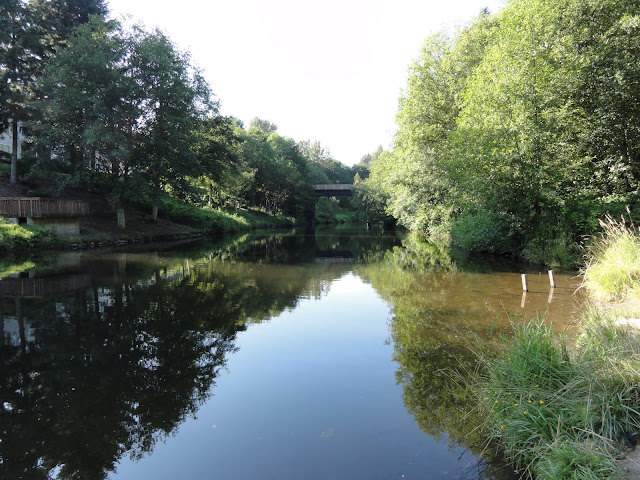 And you'll find another little park where you can sit by the water and amuse yourself by dabbling in it before the long walk back.

On the way, you might be lucky enough to catch a squirrel noshing on cornmeal: 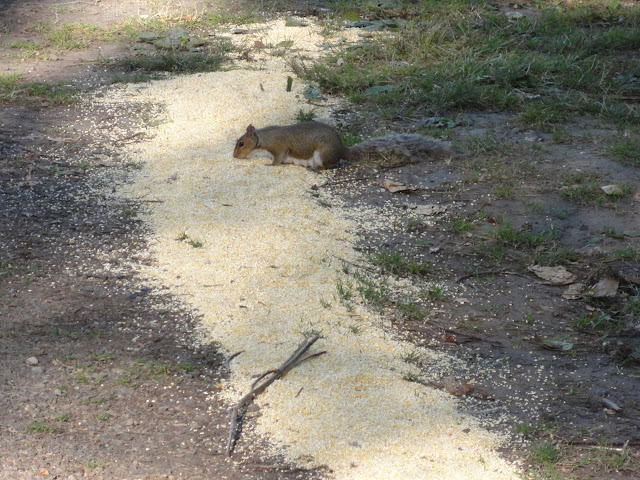 And, for our finale, I was able to shoot the moon! 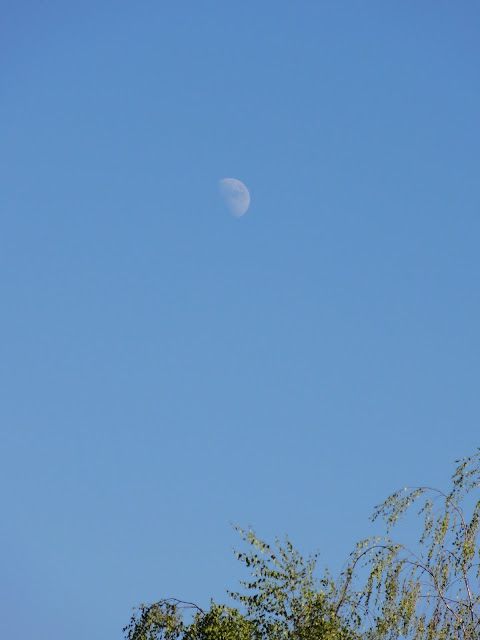 It's nice to have a camera that can take actual pictures of the actual moon.

Afterward, we headed off to the theatre to see Despicable Me.  Scientists need to turn off that part of their brains, because the science in it is, well, despicable.  But it's a fun film for all that, a lot better than I'd thought it would be.  And then home to do what I do after every adventure - scrub rocks.  All in all, a very successful first adventure after the ambush.
Posted by Dana Hunter at 1:23 AM

You are having way too much fun!

See if your camera has auto-HDR mode for those ultra-high-contrast scenes like the cabin with sunlight behind it. If memory serves, some Sonys do.

Oh Hell, this post brought back memories of all the hours we spent trekking up and down beaches in Michigan looking for agates. After whole days of work, we returned with maybe a baggie full of little pebbles. Then, invariably we would stop for gas and see on the counter a gallon jug of golf ball size agates for sale at maybe a quarter apiece!