Mystery of the Lighthouse

The mystery being, of course, why the Mukilteo Lighthouse had a sign up saying it was open between the hours of 12-5pm, and yet it was closed at 2pm.  Not a sign anywhere saying that they won't actually be open until July 24th.  Argh.

So much for adventures in lighthouses (we're two for two so far this year), but we had a decent adventure at the lighthouse.  Follow me after the jump for all the pretty pictures (and, naturally, rocks).


Mukilteo Lighthouse is a rather cute structure: 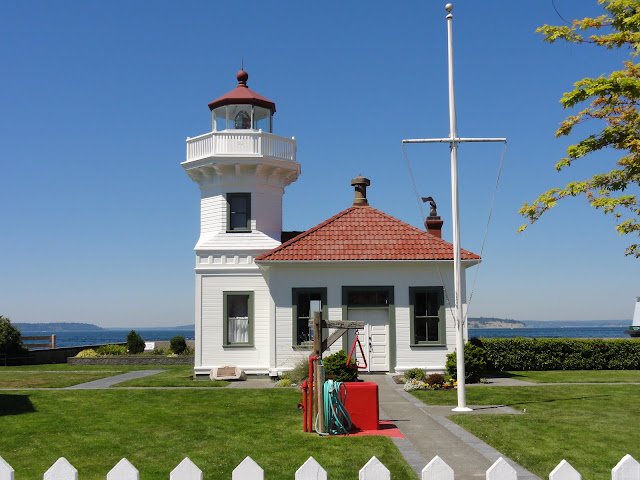 It's located at an area the Brits called Rose Point, where Captain George Vancouver landed in 1792, saw wild roses, and had a sudden idea for naming the place.  It's now called Elliot Point, and the lighthouse was built there in 1905.  It's a very nicely-preserved specimen of the species, and adorable from any angle: 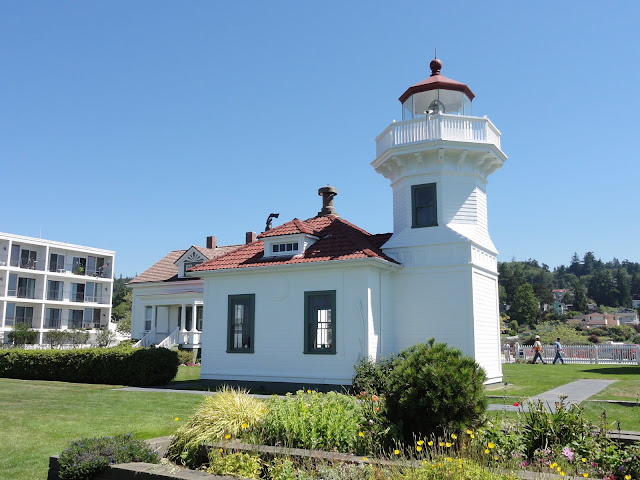 From here, the Olympics just peek around various islands and so forth, but you get an outstanding view of Mt. Baker, which is usually buried in clouds.  Not today.  No, it was 90+ degrees, barely a cloud in the sky, and so I finally got a photo of one of the three most famous Washington state Cascade volcanoes: 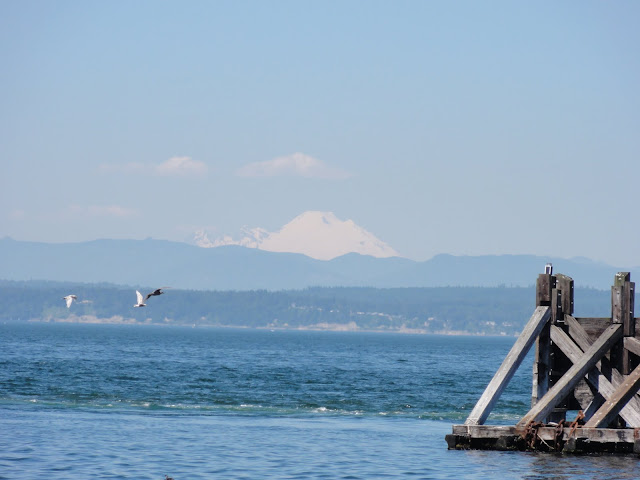 I mean, how awesome is that?  I haven't read up on its eruptive history, so I'm not sure how it came to have that notch on the right side of the summit, but it makes it look a little bit like a dude with his head back and his mouth open, singing to the skies.

You may notice the three birds at the left.  Today was the day for tres pájaros: 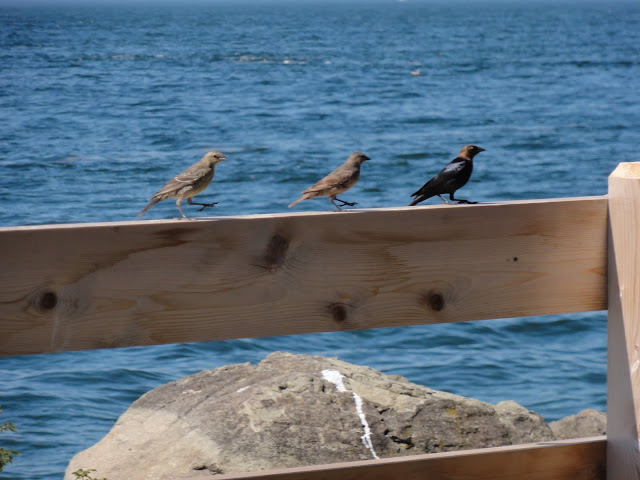 The (closed) lighthouse and conga-line birdies could only keep me distracted for so long.  Even Mt. Baker on glorious display could not hold my attention.  Y'see, there was a seawall, and a seawall means rocks, and well, you know me.  I had to go exploring amongst the boulders.  Some of them had really wonderful inclusions and encrustations and veins, like this one: 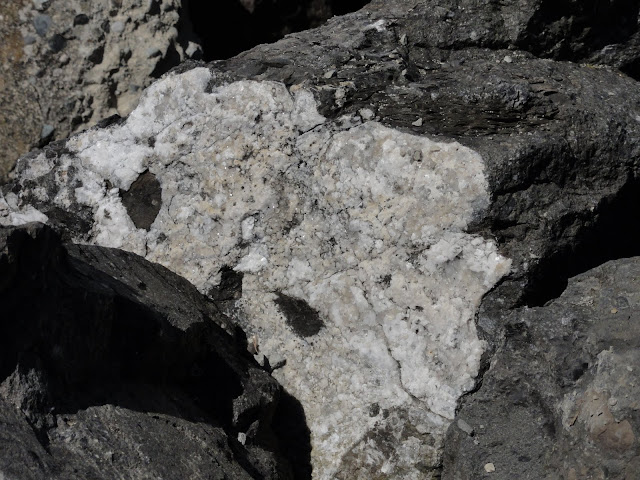 Tip your head, and it would sparkle prettily in the sun.  That's my kind o' rock!  I think it's some sort o' andesite with quartz, but don't quote me on that.  I come from northern Arizona, where identifying rocks is dead simple: if it's black, it's basalt.  Red is sandstone and tan is limestone.  End of story unless you crawl down into the Grand Canyon to look at the wild variety.  I didn't even know such a thing as conglomerate existed before I moved up here, and found piles of the stuff in seawalls: 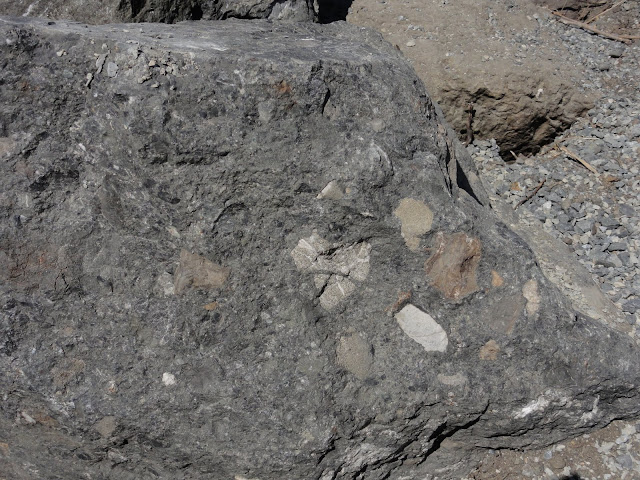 I used to think that stuff was concrete, but no, it's all natural.  This one didn't display its constituent rocks very well, so I can't tell if it was created by glacial leavings or a river bed.  Either way, it's fun to look at.  Well, for me, at least.  Don't know about you guys, but it's my adventure report and I can stuff it full o' rocks if I want. 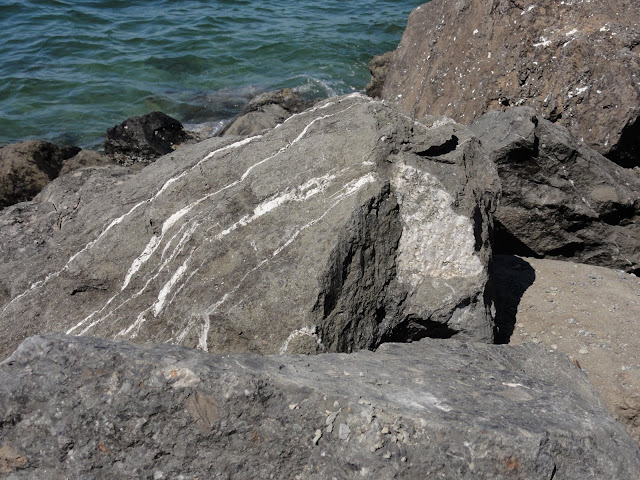 From the way it's weathering, it looks like that big slab o' quartz or calcite was deposited in fractures, and we can see just how far those cracks went by looking at the bit where the host rock was torn off.  So if you break that baby open, it'll have sheets of the white stuff.  Very pretty!

And then there's this one, which has a rather stepped appearance: 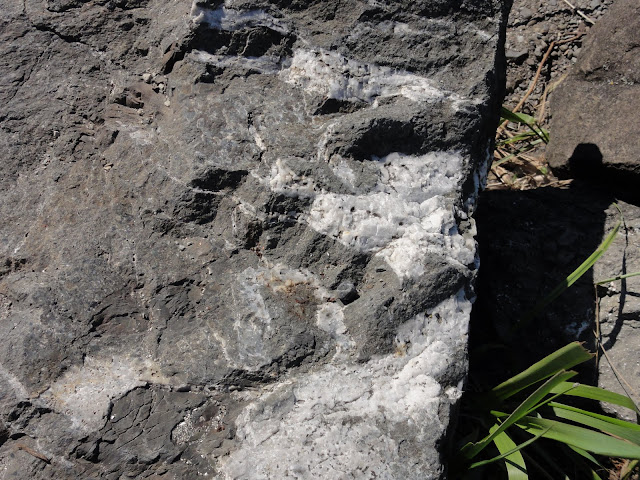 Which I liked so much I took a closeup: 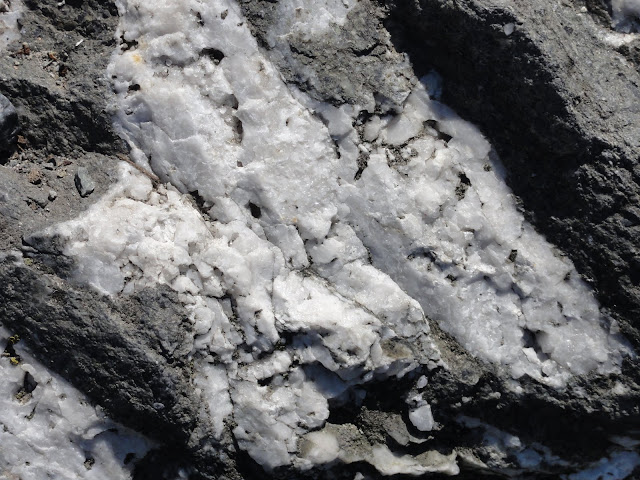 Don't ask me why I love that stuff so much.  I just do. 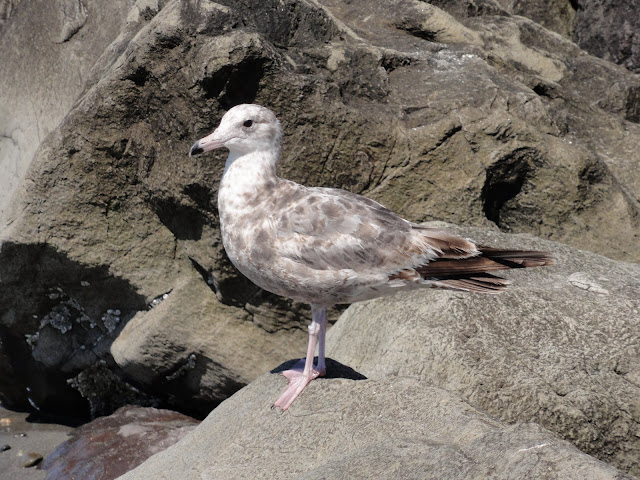 And I caught a crow cleaning itself, which actually turned out looking rather interesting: 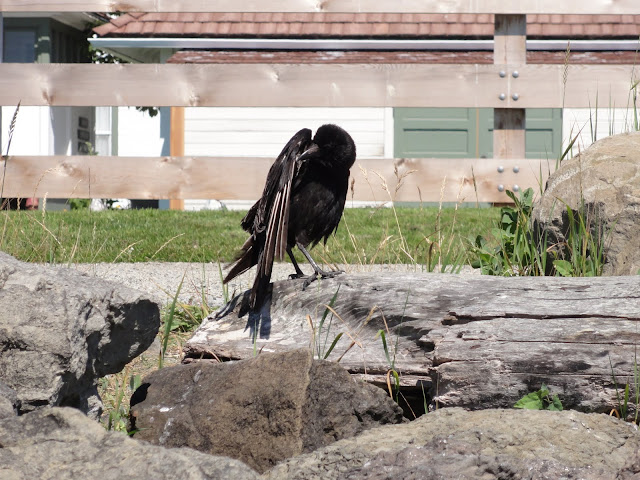 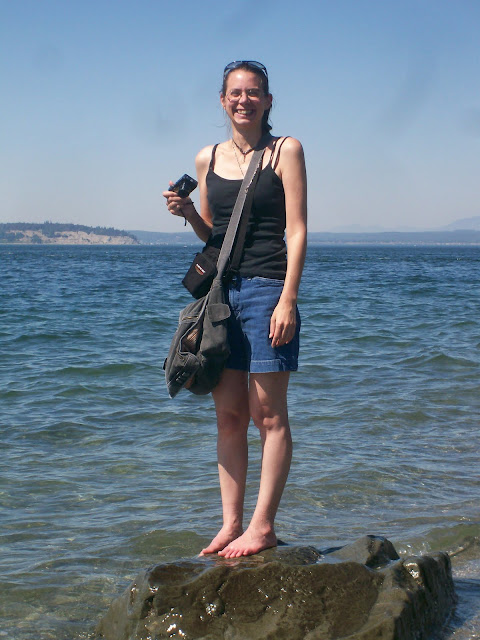 Yes, my darlings, my intrepid companion did a good job catching me in all my knobby-kneed, bag-laden glory there.  Can you tell I'm having the time of my life?  I'd just discovered a clutch of sea creatures on that rock: 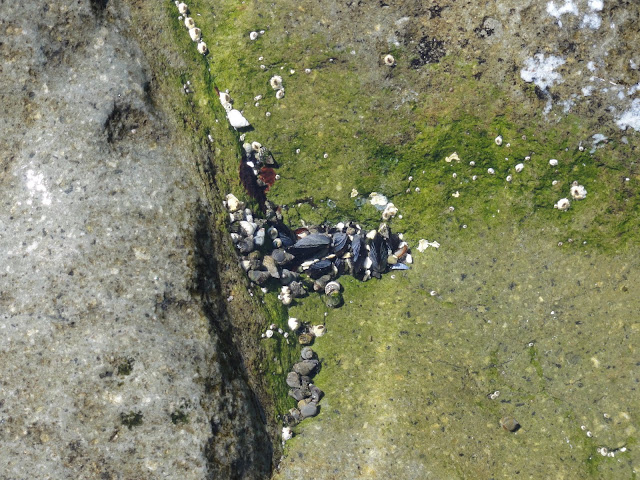 Abalone, snails and barnacles, oh my!  Living, too!  I rarely see live abalone.  So yeah, I was a bit excited.  It even distracted me from rocks for a bit.  But not for long.  I'd found a shiny piece of biotite schist the size of a silver dollar and another nearly the size of my hand, so I was on a mission.  Alas, the tide was coming in, so rockhounding got cut short.  What's a rockhound to do but watch wave action on rocks?  Cujo caught an excellent shot: 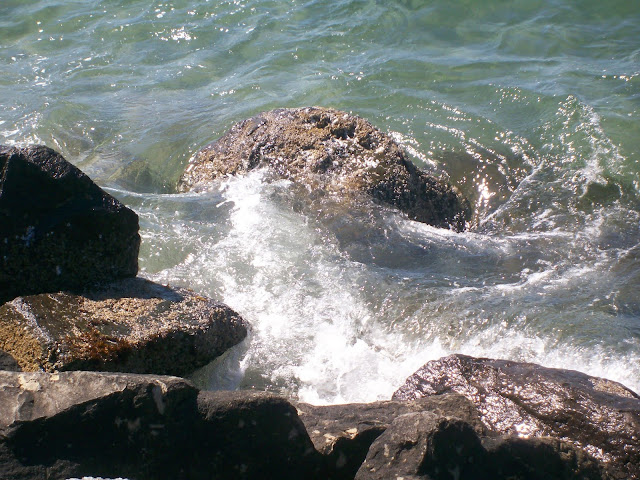 The water would come rushing in, swirl and whirlpool and eddy and splash, and then gallop back out.  It was spectacular, and it certainly led to some fun photo ops: 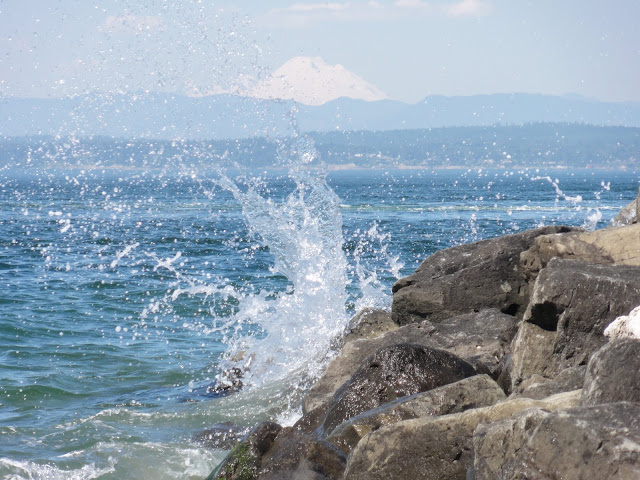 Eventually, we had to make a tactical retreat for the sake of the cameras.  Even though it was a fairly calm day, the waves were vigorous.  I ended up perched high within the seawall, letting my feet dry and noticing a big ol' chunk of what I'd swear is rhyolite: 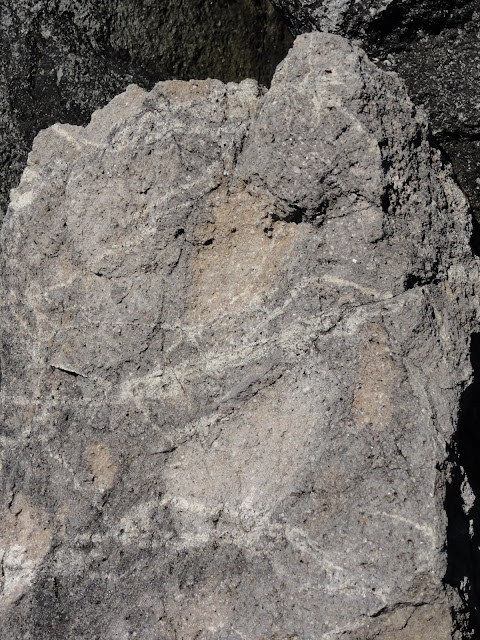 I'd never known volcanic rocks came in pink until I encountered rhyolite.  The camera's emphasizing the gray, but against the dark andesites and basalts, it stood out as very pink indeed.

Alas, all adventures come to an end, even when all you want to do is live right there on the beach forever.  Who wouldn't when the view's this great? 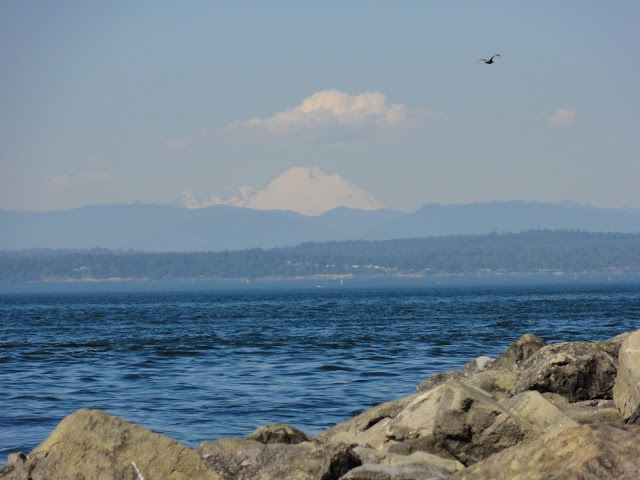 And yes, there are rare times when the water and skies in Seattle aren't gray.

Afterward, we dropped by a little roadside park that gives a spectacular demonstration of the power of stream erosion, but that's a story for another day.  I'm still trying to forget the endless stairs up the side of the gulch in the heat o' the afternoon...
Posted by Dana Hunter at 3:56 AM