'Twas a dark and stormy day, so my intrepid companion and I hied ourselves off to the Seattle Aquarium for some fun with fishies.  It seemed the only reasonable thing to do. 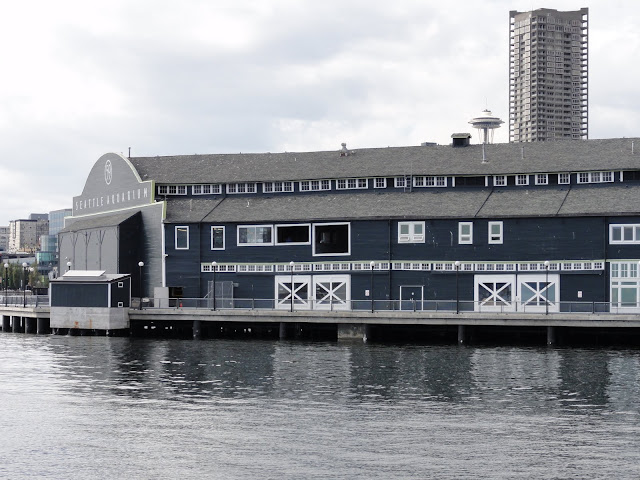 Was it worth missing the 10 - 15 minutes of sunlight Seattle got this afternoon?  You be the judge!  Follow me after the jump for mah catch.


One of the first things on offer, after a giant wall o' fish, is a long, skinny, open-topped tank that waves pour surges of water in to.  It's filled with starfish and urchins and that sort o' thing, and we very nearly didn't get to molesting any sea mammals because watching the waves roll in is just too much fun.  I took a few burst sequences.  Here's a calm moment: 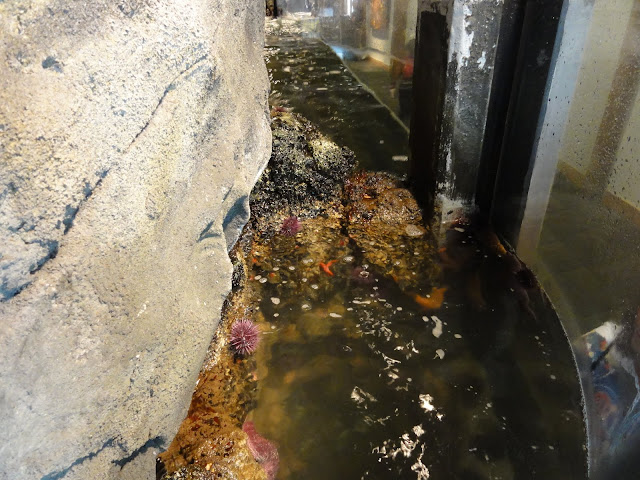 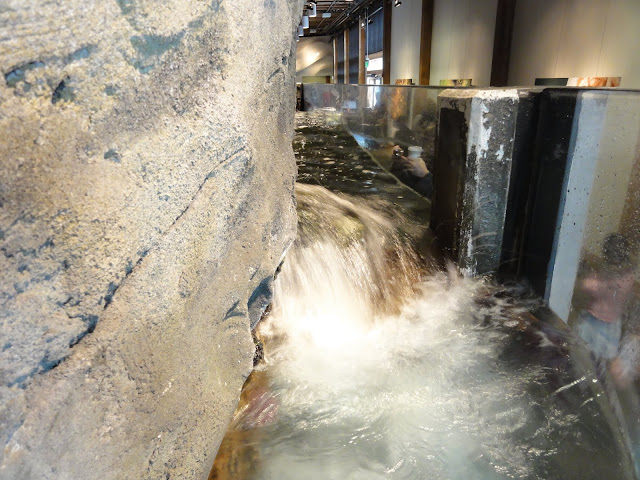 What's interesting about this tank, aside from the fact it is awesome and fun, is that you can see how waves impact the water beneath.  Deeper down, it stays pretty calm while the stuff on top is churning like river rapids.  Pretty neat.

So is being able to get a rather interesting shot of a starfish with urchin: 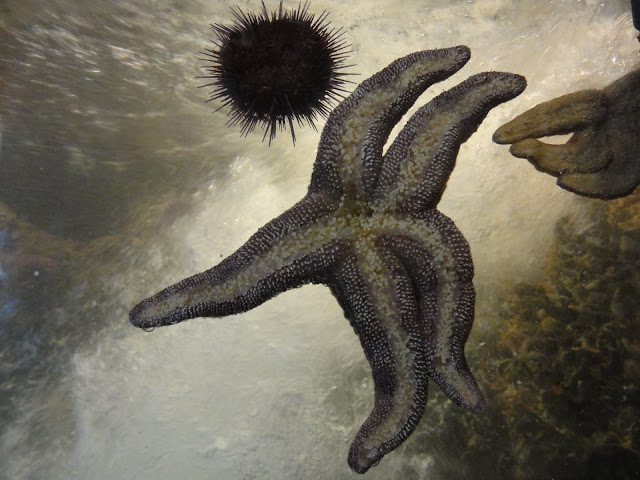 As you can see, the two of them weren't hanging about in the calm bits.  And yet they didn't seem to care a bit that the water had gone white all round them - they just stayed firmly anchored, and one can imagine a bit of a Monty Python skit here.  Does anyone know if starfish et al can fart in someone's general direction?

After tearing myself away from the tank, I wanted to get right to the sea mammal molestation*, but we were diverted by the Life on the Edge exhibit.  Who could pass up the opportunity to exasperate the echinoderms+ instead? 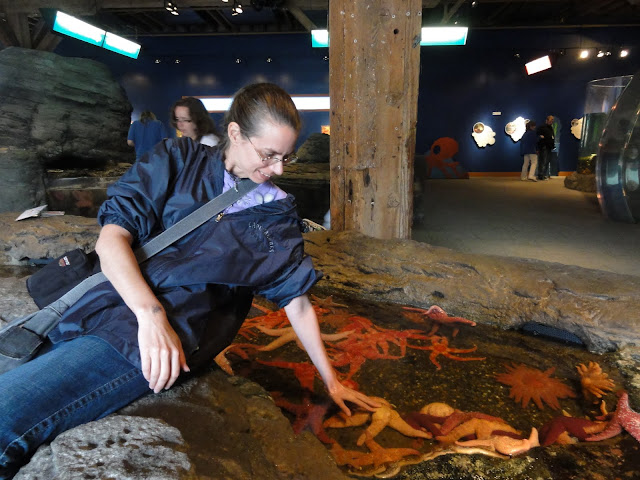 You know, I'd never touched a live starfish until now.  They look kind of soft and glisteny, but they're actually raspy.  You wouldn't expect them to be as flexible as they are.  And they has such cute little feets! 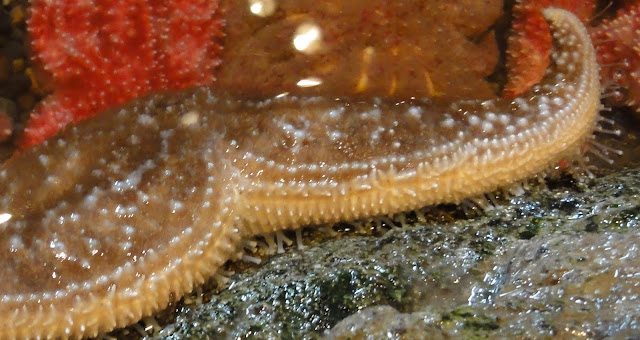 Enlarge that picture and look carefully at the underside, and you'll see dozens upon dozens of translucent white feet.  Goofy-looking little white feet that are the terror of the seas - I don't know if you've ever seen a nature program with starfish feeding, but those buggers have got some speed on 'em.  And they're not wimps.

A mottled sea star and I had something of a Michelangelo moment together: 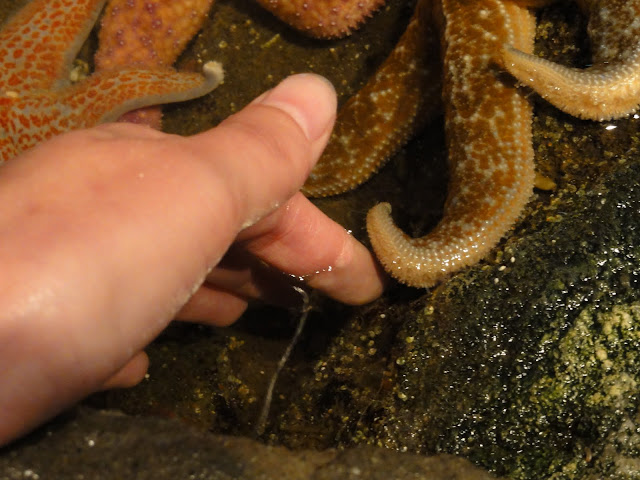 Those feet aren't as soft as they look.  I think that tells you basically what you need to know about a starfish: they're not quite what they seem.

But lest this turn starfish-centric, let's move on to the other echinoderms.  There were plenty to choose from: 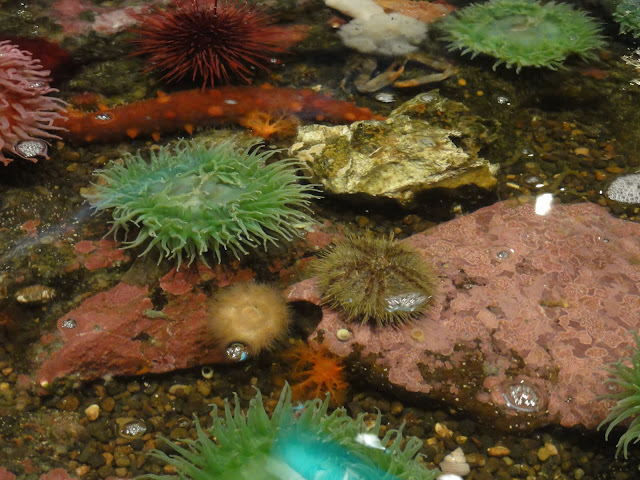 And lest we become echinodermocentric, here, let's just note there are also crustaceans and cnidarians hanging about.  Here's a neat cnidarian now: 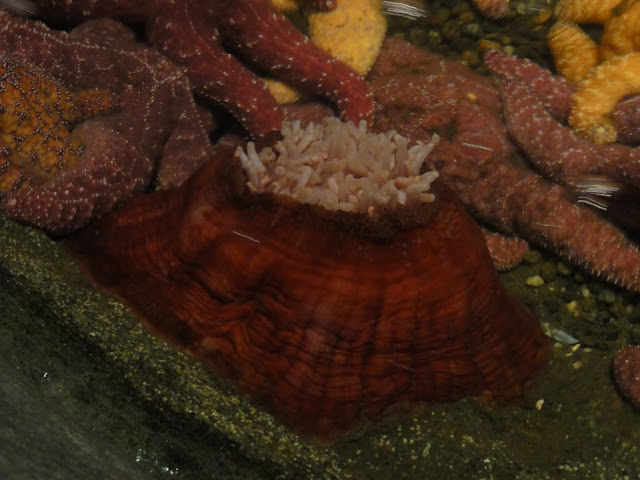 That's a meat coral.  A sign at the museum assures us they're among the largest single-polyp corals, and can reach half a foot in diameter.  They're bloody huge.  And they look oddly tasty, which is one reason for the name, I suppose.

But I'd had an excellent seared scallop chowder lunch, and I was more interested in playing with the purple urchins anyway.  Purple's my color: 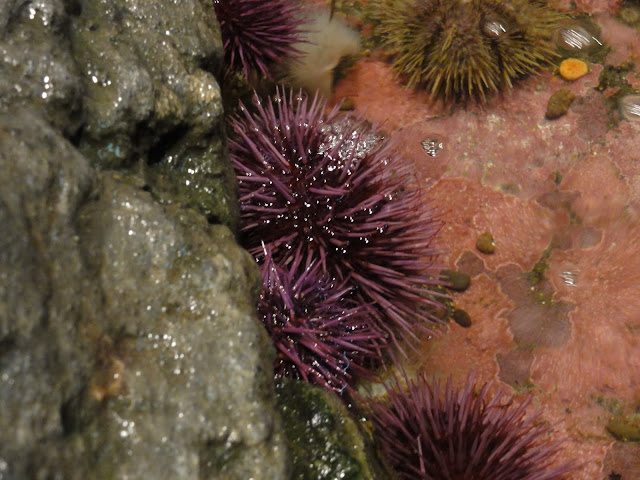 They look spiky, don't they?  That's cuz they are spiky.  They're covered in very firm, blunt spikes that feel the way a porcupine's quills look, only they won't hook your flesh.  They sting, though.  They're safe for humans to touch, which is good, because when I had my fingers resting against one of them, I got distracted and left my hand there a moment.  When I went to pull back, I discovered the little bugger had latched on to me, and it took a bit of effort to get my hand back.  Too bad my intrepid companion wasn't lurking with the camera just then - my face was probably very entertaining.  If you want to know what was going through my mind, it was, "Shit, I hope they didn't put anything poisonous in the petting pools...."

At last, I escaped the suckers and dragged myself away from the echinoderms, but before I could make it to the sea mammals, I got waylaid by jellies: 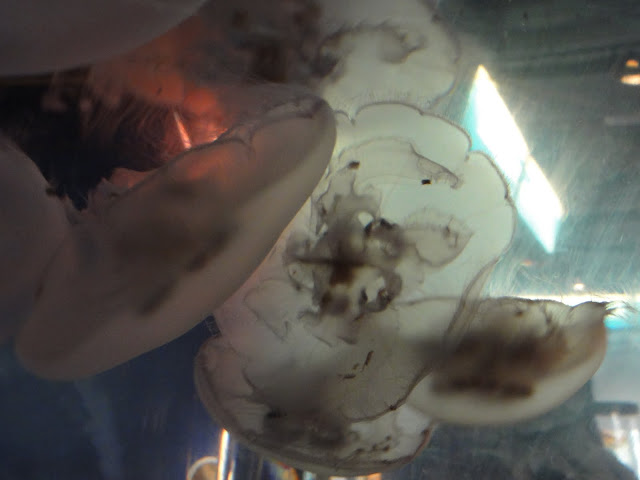 Those are moon jellyfish, and they were floating happily through a great arch of a tank, one side of which was all lit up by a blacklight so they'd glow.  They were awesome, and I probably would've stayed to get to know them better, but y'see, there was this bloody great octopus in a tank nearby dashing all over the place, and who's going to hang about with jellyfish when there's a cephalopod hamming it up for the cameras? 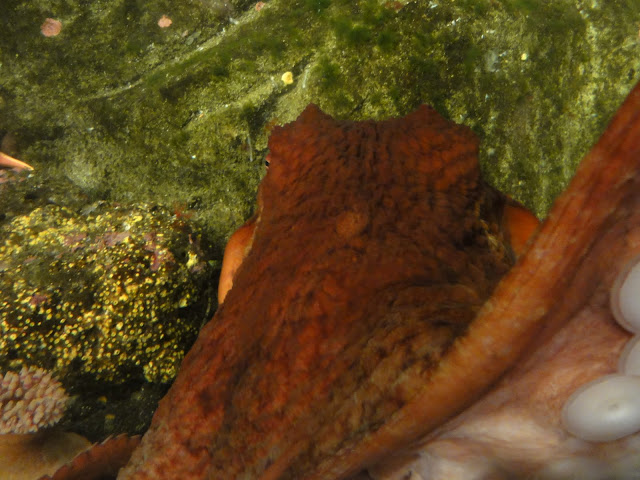 He's a Giant Pacific Octopus, and giant he is.  Just look at the size of his suckers! 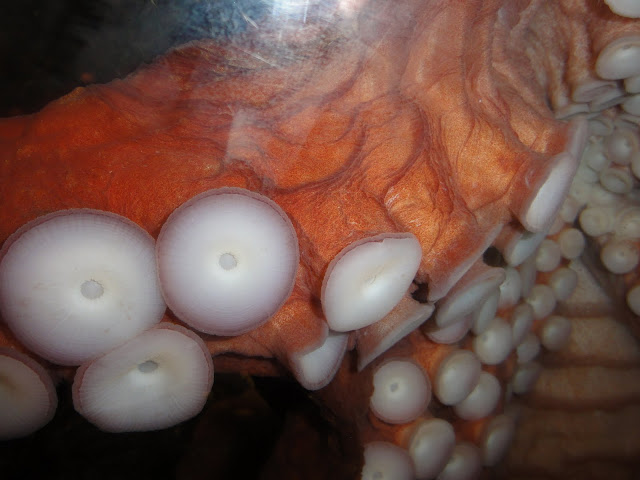 I think he was a bit bored, because he was dashing all over his tank and stopping only occasionally to show off his color-changing abilities: 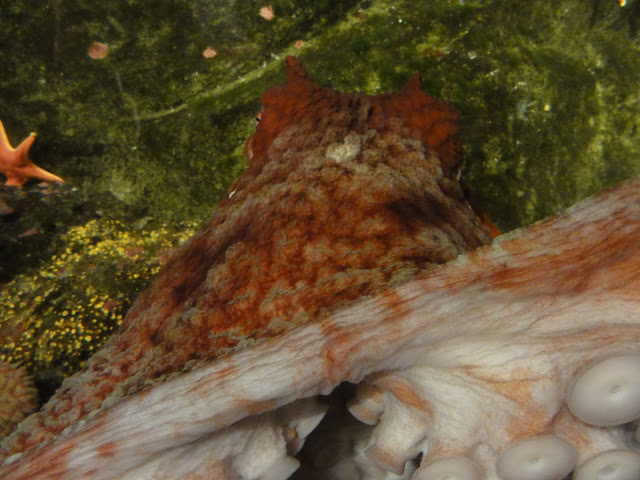 Now I wants one.  Should I ever become rich and famous, I'm going to have a tank installed that runs in tubes through a great part of the house, and I shall have an octopus.  I shall hug him and squeeze him and pet him and love him, and I shall name him George, and I shall teach him to predict the outcome of sporting games so that we can sucker the public into thinking he's more psychic than Paul.

Until that day, I shall have to content myself with the video I took, which I shall post for you eventually.

I tore myself away from the octopus eventually, and interested myself in some sea slug eggs.  Whoever would've thought they could be so artistic? 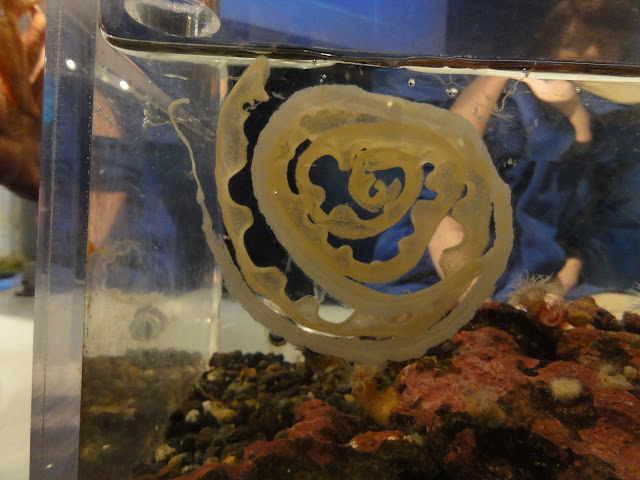 The museum staffer there told me that this lovely spiral pattern contained hundreds of thousands, perhaps even millions, of eggs.  That, my darlings, is a fuck of a lot of potential sea slugs.

All this molestation++, and we haven't even got to the sea mammals yet.  And we shan't tonight, because Dana's drowsy.  Too much fresh sea air and adventure, not to mention so much wonderful chowder.  But I suppose you'd like me to leave you with something a little less gooey than sea slug eggs, no matter how geometrically laid they are.  So, in honor of the fact that I'm about to crawl into my nice, warm, comfy bed, let's have a very sleepy marbled godwit: 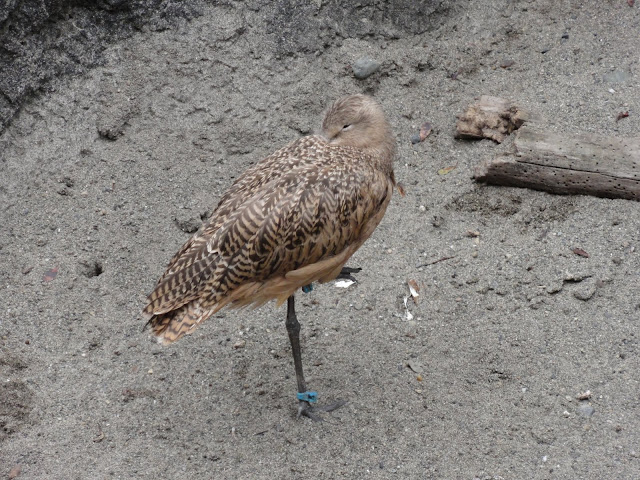 How they evolved to sleep standing on one foot with their heads rammed down the back of their own necks, I'd very much like to know.  And I get marbled, but why godwit?  Is it because they're divinely funny?  Do they excel at celestial stand-up comedy?  It's plausible, considering the way they sleep.  These mysteries I shall ponder as I drift off myself in what the marbled godwit likely considers a bizarre and uncomfortable position.

And thee shall have sea mammals on the morrow, my darlings.  I promise!

*No sea mammals were harmed in the making of this post.

+No Echinoderms were harmed in the making of this post. They might, however, have been slightly annoyed.

++Look, absolutely no sea creatures, mammalian or otherwise, were in any way harmed in the making of this post.  It's just funny to talk about molesting sea mammals when you're going to an aquarium where you can touch some of the denizens.  You can go check their welfare for yourself, if you like.  Now stop looking at me like I'm some sort of malignant mammal molester.
Posted by Dana Hunter at 2:36 AM