Yesterday, we began rambling through the aquariums at the Point Defiance Zoo and Aquarium.  I promised thee more sea creatures, and more sea creatures thee shall have.  With the caveat (in answer to a previous comment) that no, I'm not sure of a great many of my identifications, especially not of the squidgy little blobby things that all look remarkably similar in those helpful species identification drawings.  And as far as the following sea denizen: 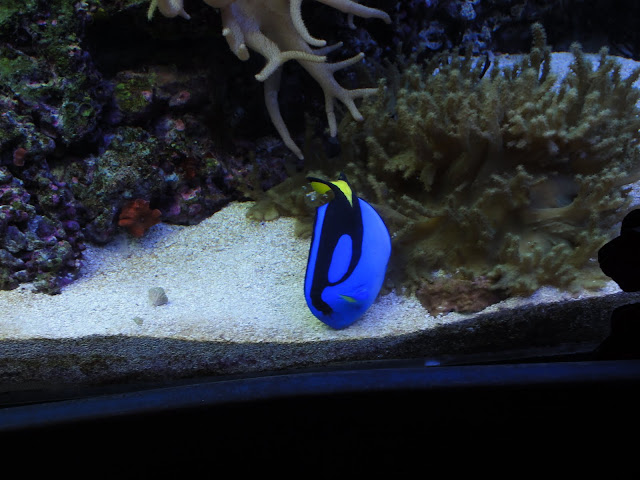 I can help you not at all, because neither myself nor my intrepid companion could find a single damned sign telling us what it might be.  We saw the same species o' fish at the Seattle Aquarium and found no helpful signage there, either.  Apparently, the species name of this animal is classified Above Top Secret.  So, here's my identification: it's a tropical fish, and it's this big and it's blue.  I include it here because I was so damned excited that the camera actually captured its neony-goodness.

We'll have a wee bit more luck after the jump.


Okay, well, a little luck, but not as much as one might have hoped.  Because I forgot to photograph the signage that would have oh-so-helpfully told me which particular seahorse species these are, but seahorses they be, and I loves me some seahorses: 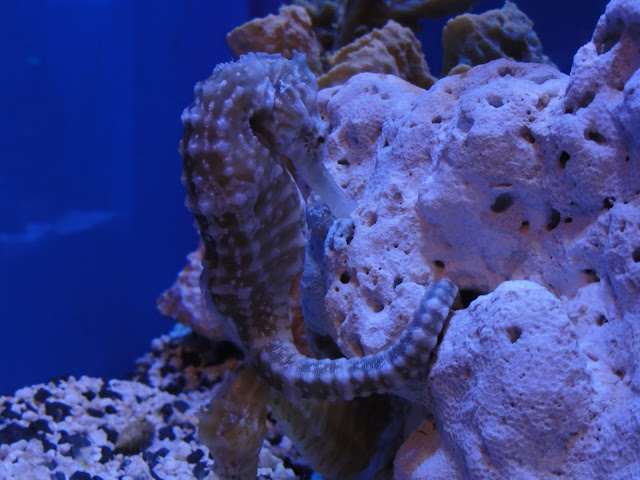 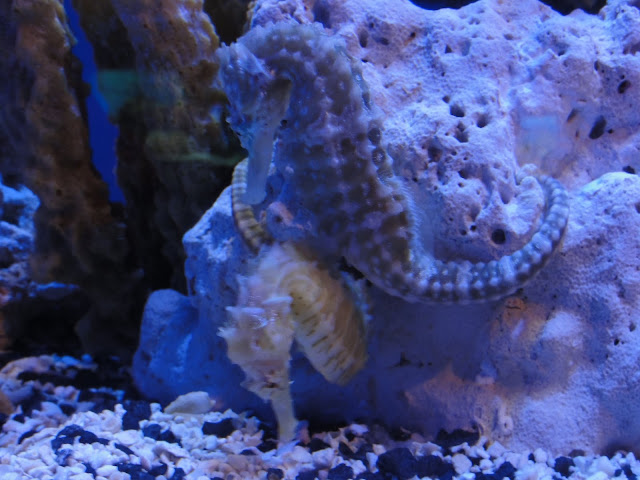 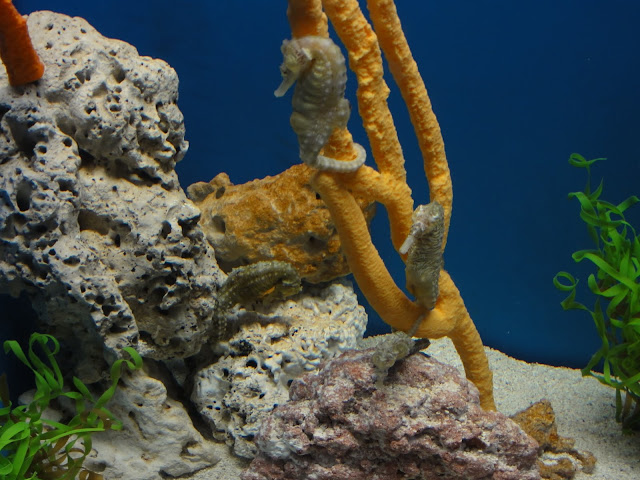 According to Wikipedia, I could probably identify their species by counting their rings, but bugger that.  We've got plenty of fish to fry, some bigger and some quite a bit smaller: 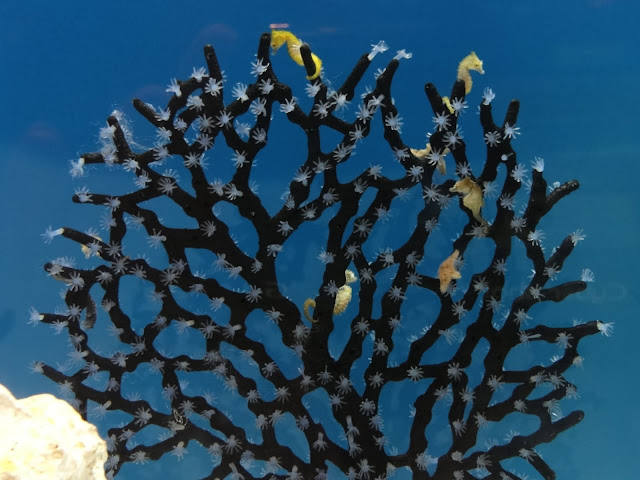 Those I did photograph the sign for, but it would be hard for this former quarterhorse owner to forget the awful "quarter" horse pun on it.  These are dwarf seahorses.

And that will be quite enough of seahorses, methinks.  Let us turn now to what I am very nearly ready to swear must be a queen angelfish, unless it isn't: 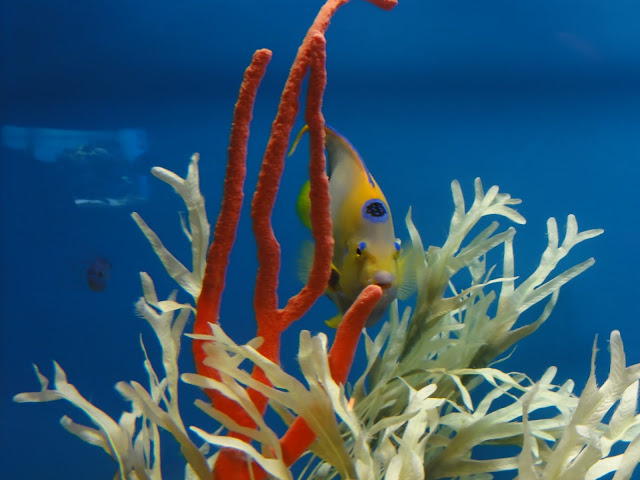 And yes, she's all dressed up in camouflage.  Funny how your ideas of camo change when you live somewhere all bright and colorful like a coral reef, innit?

Now we get to animals I can swear I'm right about.  Such as this dude: 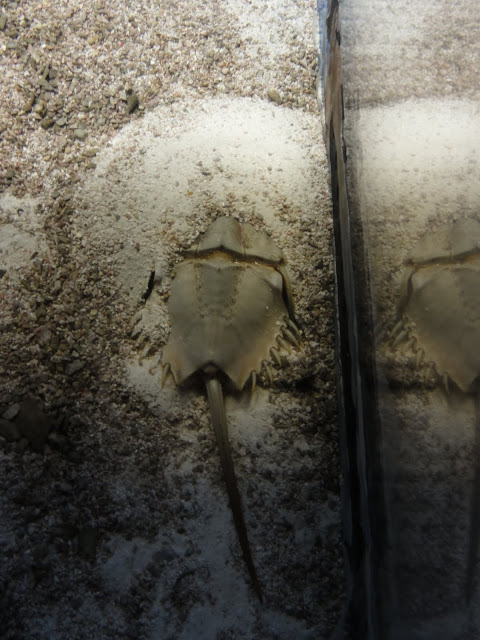 If that's not a horseshoe crab, I'll eat my hat.  And I cherish my hat - it's got Roger Clyne's DNA on it.

I'd never seen a horseshoe crab actually move before.  I mean, yes, I've seen footage of them wandering around beaches and so forth, but it was a little different seeing one explore the confines of its tank.  It was more fascinating than I can say, and so I shot video of the more energetic one:

We'll surface now, and enjoy ourselves some marine creatures that spend time both in and out of water.  Here are some Magellanic penguins partaking of shade on a hot day: 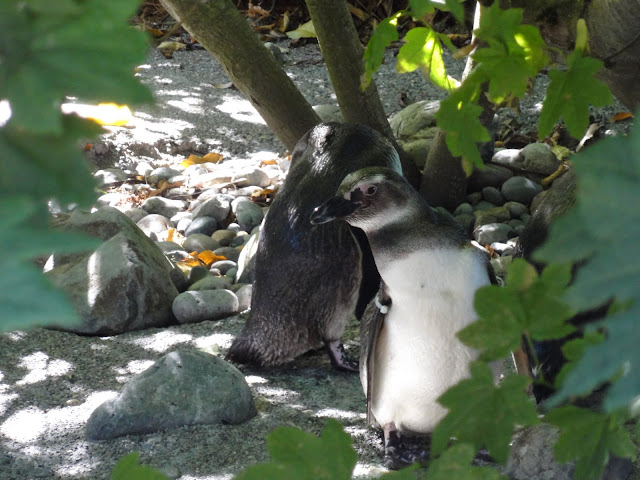 They're warm-water birds, but apparently not hot-sun birds.  Later, though, they emerged from the trees and did some basking in plain view, although they still weren't playing the sun-worshipers: 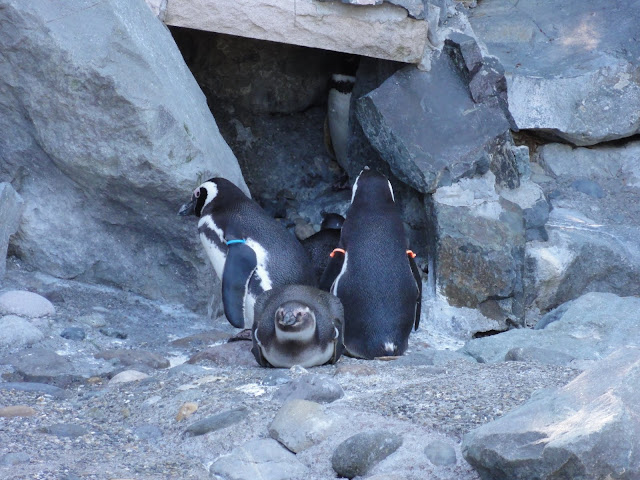 The zoo also had some of the same puffins as the Seattle Aquarium, only this time, we weren't viewing them through water-splashed glass.  One of them decided bugger the water and headed for high ground: 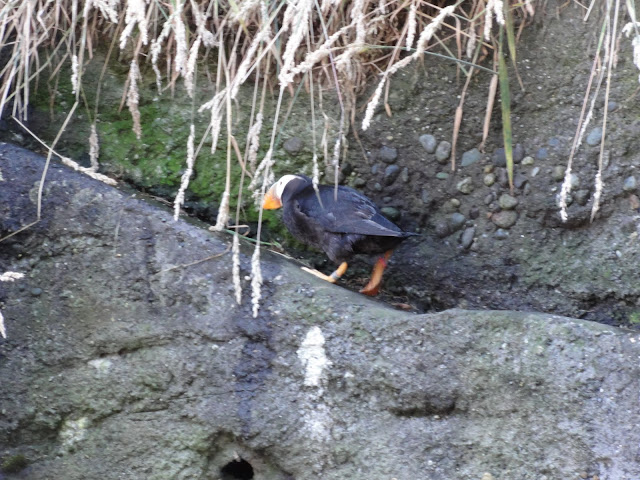 When he got there, he looked damned proud of himself: 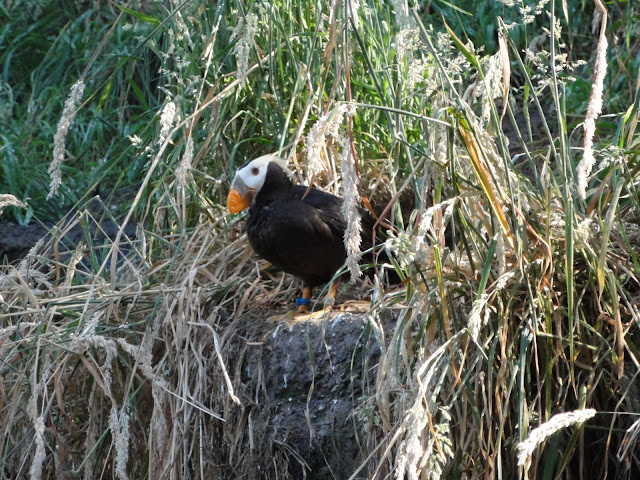 Nearby, a walrus was making the rounds of the walrus exhibit, and kept coming back to take a bow: 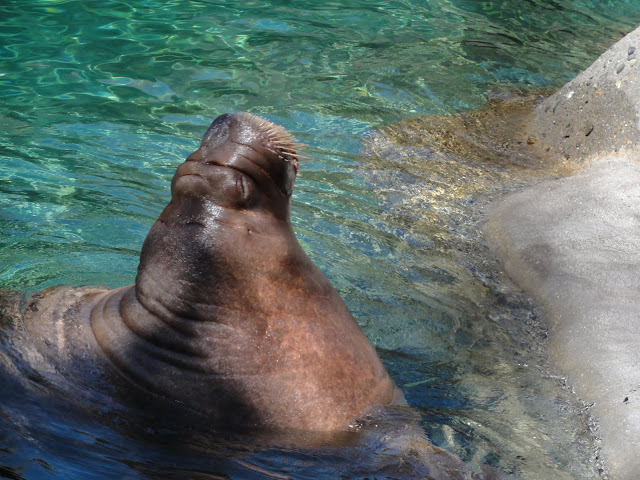 You don't really appreciate how enormous those things are until you're standing by the underwater observation portion of the exhibit, watching it make its turn, and realize that if you were caught between its back and the glass you'd get squished like a bug.  They're massive.

The harbor seals were pretty active, too, although completely uninterested in coming out of the water.  Here's a particularly lovely one: 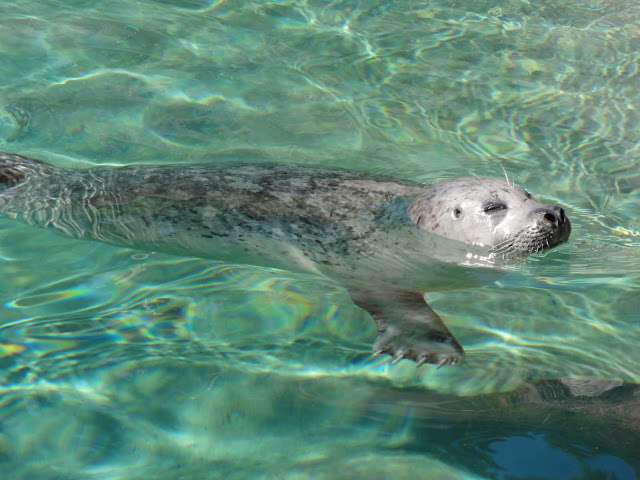 And yes, I did want to jump right in and go swimming with them.  They looked like they were having fun.  They'd usually go about in a group of two or three, making synchronized turns when they came to the end of the pool without fully emerging from the water.  But when one came to the end alone, it would pop up like a jack-in-the-box, as if wondering where the hell everybody went: 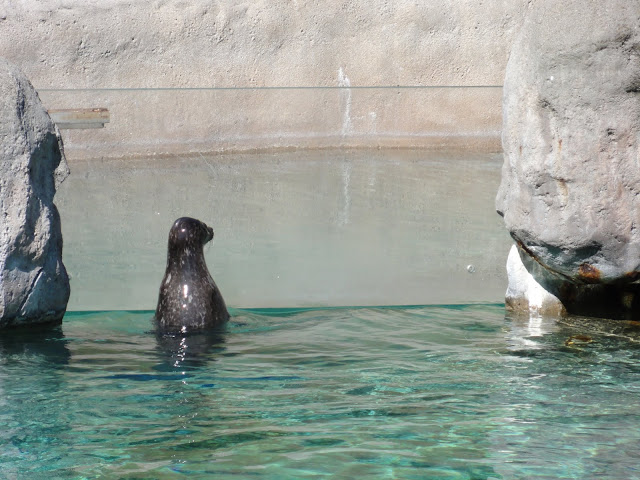 And, of course, no trip to a Northwest aquarium would be complete without the adorable, lazy little sea otters: 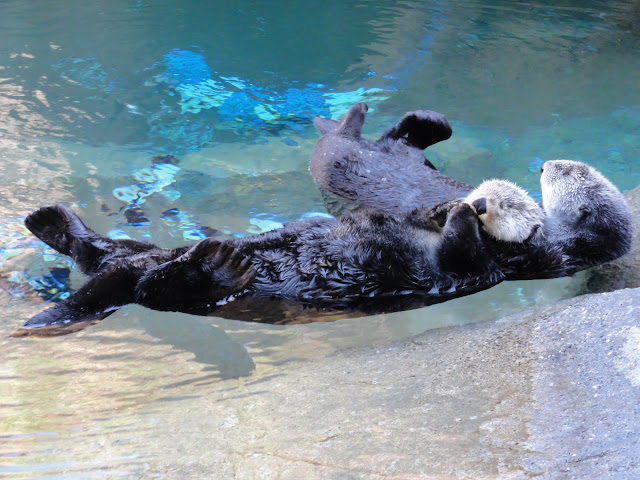 You know what, if the Buddhists turn out to be right and we're all destined for another turn on the wheel if we fuck this up, I hope I get to come back as a sea otter in an aquarium.  These little blokes always look like they're having the happiest lazy day ever.

And that about does it for the marine life.  In our next excursion, we shall start molesting land mammals, and you'll get to see why my intrepid companion and I were so very fortunate in our choice of days to visit the zoo.  Begin practicing your ooos and aaawwws now.
Posted by Dana Hunter at 4:09 AM

I see how it is. Siding with the otters huh?
Fun fact: When I was about 10, I was attacked by a river otter at a place called Lost Lake here in WA. 50+ scratches all over, I still have some of the scars from the deeper scratches and tears.
Disclaimer: I hold no ill will towards them. I almost have the kind of respect for them usually reserved for previous foes. A previous foe who is cute and cuddly looking.

No Gods, No Masters
Cameron

IIRC, that other pool the seals were so interested in was the otter pool. Apparently, everyone thinks they're cute, even people who are mauled by them.

ok, i wanna go here too.