Poor Karen.  She's gone days without so much as a whiff of geology from this blog, and it's got to be wearing by now.  So let's remedy that.  There's even geology at a zoo, if you know where to look:

That, my darlings, is Mount Rainier.  More specifically, it's a massive rotten mass of a stratovolcano covered in glaciers, and folks hereabouts aren't so much afraid of it erupting as simply falling apart.  Sometime soon, we'll talk about how lava becomes clay and hence leads to the possibility of a mountain simply falling down, which depending on how it comes about may mean that the mammals here have a Very Bad Day indeed.

Still, it's pretty.  And on a clear day, it's clearly visible from Point Defiance Zoo and Aquarium, which fact very nearly meant we didn't get to the mammals.  However, we tore ourselves away from the vista and headed out for some metaphorical mammal molestation.


My intrepid companion's more interested in the local fauna, but he graciously acceded to my request to hit the Asian Forest Sanctuary.  I am a sucker for most things Asian, and when you throw bebbe kittehs into the mix, well, resistance is, as they say, futile.

One of the first things we ran across was a mama Sumatran tiger nursing her cubs: 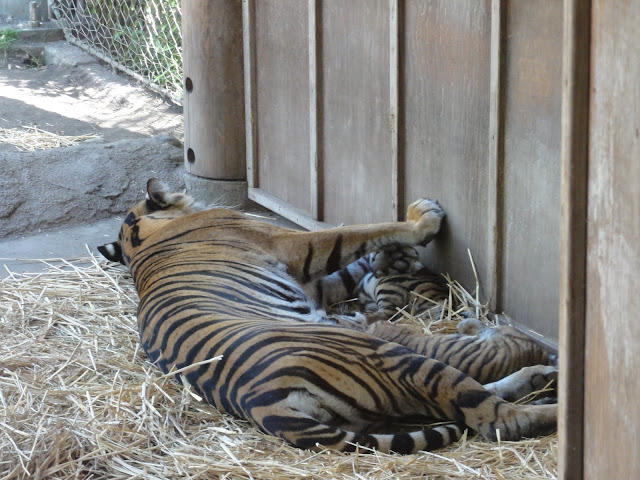 It's tragic that there's only a handful of these gorgeous creatures left in the wild.  Thankfully, they won't go extinct as long as zoos keep breeding them.

I found out later just how lucky we were - these babies are only five weeks old, and they'd only been introduced to the public that very morning.  Perfect timing!

A little ways along, the new clouded leopards have a temporary home while their permanent enclosure is built.  They're about the cutest kittehs evah: 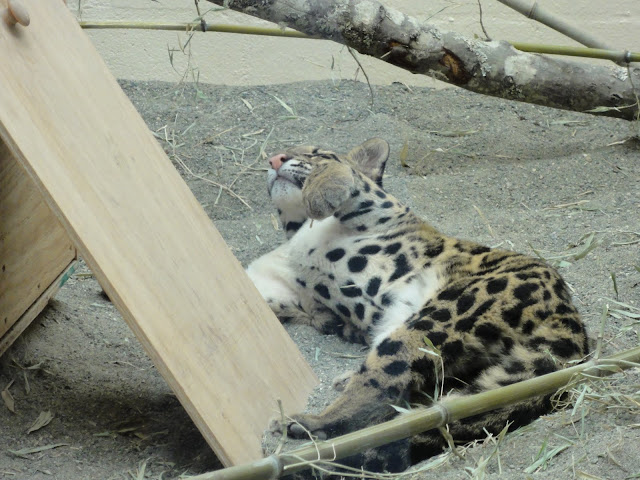 One of them spent most of its time lounging in the middle of the enclosure, but the other lingered by a mesh door at the far end.  In a few moments, we found out why - cuddles! 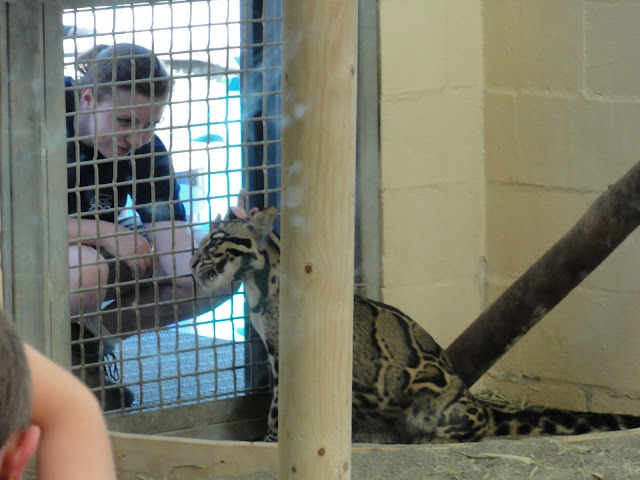 But why are the cuddles gone?! 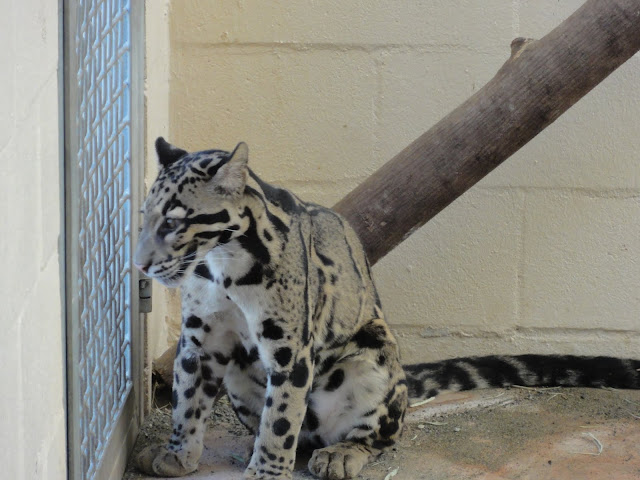 That did indeed make me wish I could become a zookeeper.  Then again, I have a very good reason for not actually giving in to such urges, and it has to do with the fact that if my 11lb domestic shorthair had been any larger, I'd be a quadruple amputee.  She taught me that felids can change from cute and cuddly to viciously homicidal without any discernible transition between the two states.  This is why I have never given in to the temptation to own a tiger, and why I have not gone online searching for clouded leopard cub sales.

Not very far away, one of our distant cousins was enjoying a lazy afternoon: 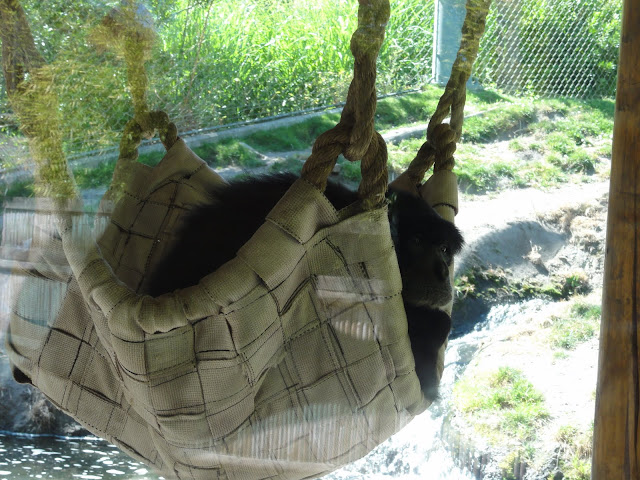 I believe he's a siamang, but considering he never stirred from his hammock, I could be very wrong about the siamang part, or indeed the he part.  Regardless, he's a type of gibbon.  And he's one of the smartest creatures I've ever encountered.  If I'd had a chance, I'd have followed his lead and spent the rest of the afternoon hanging in a hammock myself.

One of his enclosure-mates was a bit more enterprising: 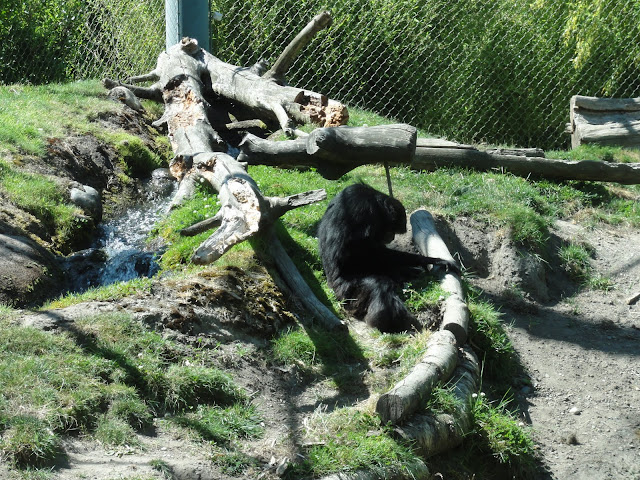 He became a veritable Bob the Builder: 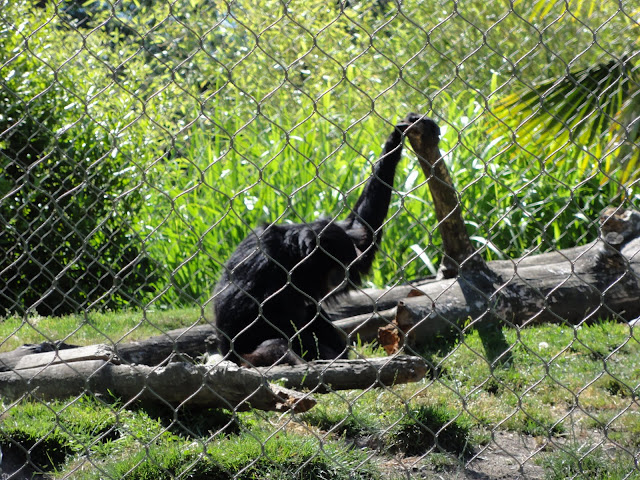 I almost expected him to shout out for a hammer.

We'll take a break from mammals for a moment and appreciate the serene beauty of a lotus flower: 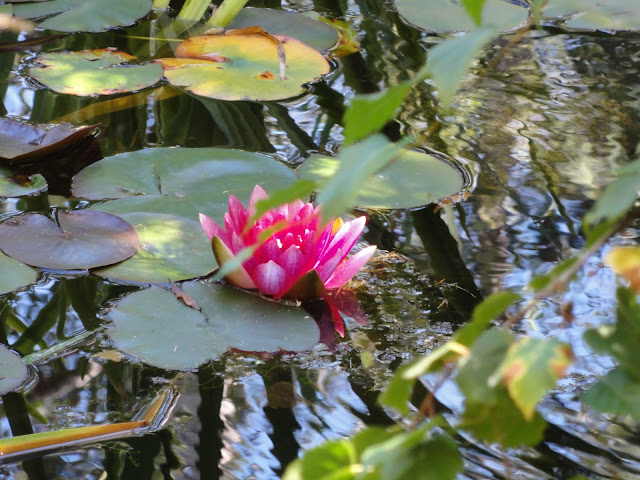 And the company of a very gregarious gyrfalcon: 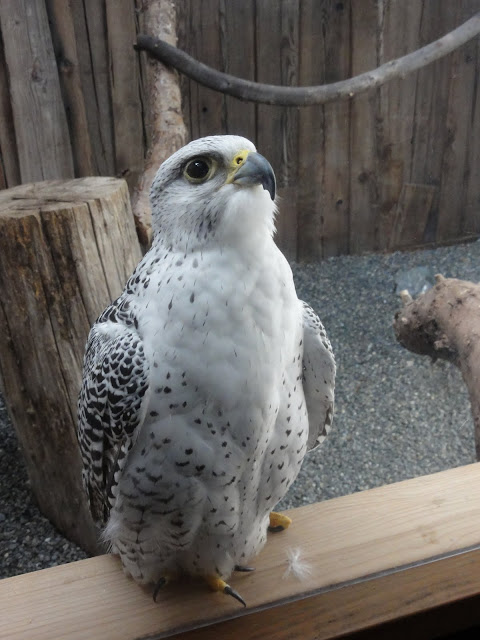 I'm used to most predatory birds being rather aloof and icily majestic.  Not him.  He stayed glued to the glass, showing off for the kiddies, and occasionally engaging in a bit of karaoke: 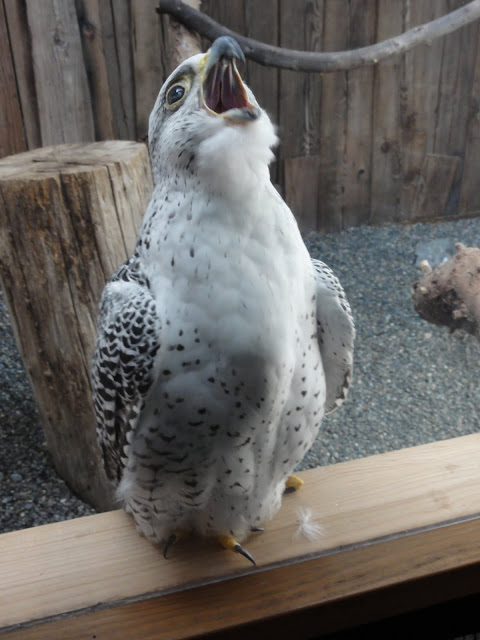 And yes, now I want a gyrfalcon.  He looked like a chap who'd be happy perched on an arm, wandering the city streets, making the occasional side-trip into a pet store for a fresh mouse or three.  He looked so bored and lonely I just wanted to break the glass and take him home.  However, the cat would've killed us both.  She's an only child and determined to stay that way.  The zoo staff might also have become upset.  So there he stayed.

Here's a chap I wasn't tempted to take home: 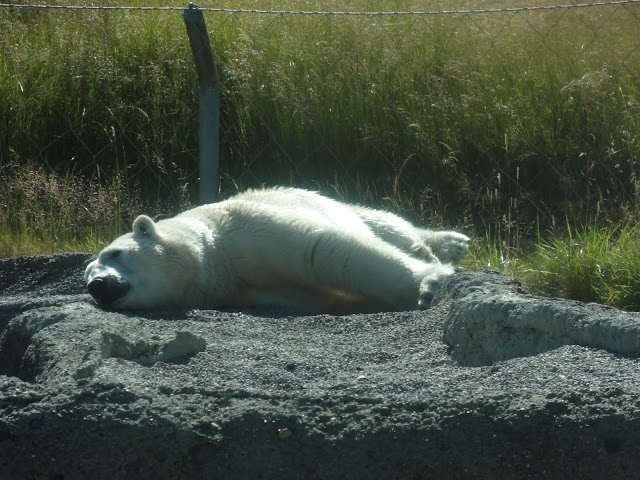 Although, believe me, the idea of plopping myself down with ye olde polar bear and spending a lazy afternoon using him as a lounge chair did cross my mind.  He reminded me of our old quarterhorse, in a way, and we'd spent many a long, lazy afternoon propped up together in just that way.  That's the problem with these wild beasts at the zoo.  They look so cute and cuddly until they, like my cat, suddenly recall they're wild and attempt to rip your face off.

A bit later on, we came to the arctic fox enclosure.  At first, it seemed there was no arctic fox in residence.  Then we noticed that a tree stump seemed strangely lumpy on top.  Then the lump began washing up: 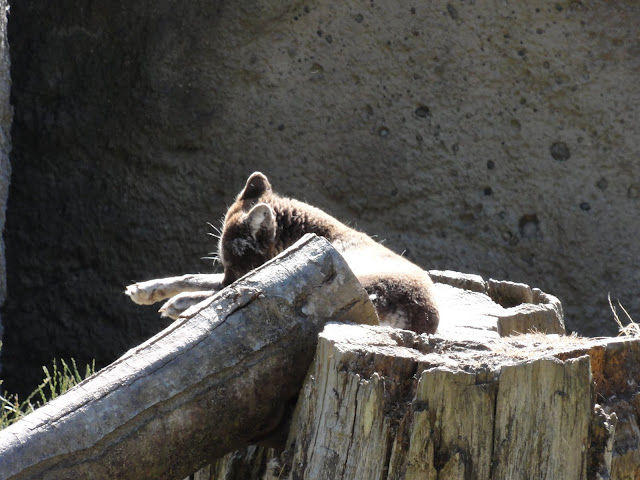 Apparently, he was bathing for dinner, because immediately after he jumped down and started stalking something we couldn't see: 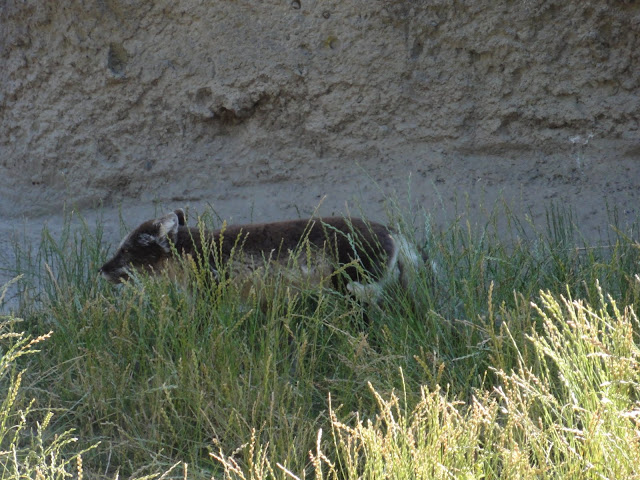 Wikipedia tells me a family of these foxes can eat a dozen lemmings a day.  Such is the harmony of nature.

Nature gets downright lazy, especially when an arctic animal like a muskox is napping through a hot summer afternoon: 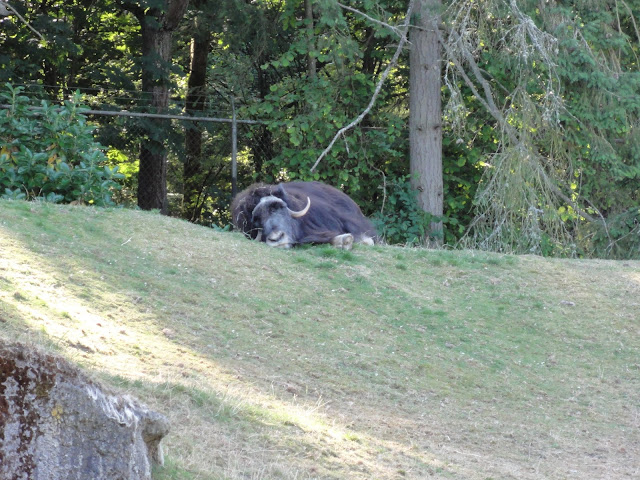 If he was standing, you would see something that resembles a hairy industrial refrigerator on pegs.  The informative sign nearby advised that bulky bodies and itty-bitty extremities are a cunning adaptation to the cold.  Not that he needs them in Seattle.

Oh, and the idiot who babbled about "eight tiny reindeer" apparently hadn't met any actual reindeer: 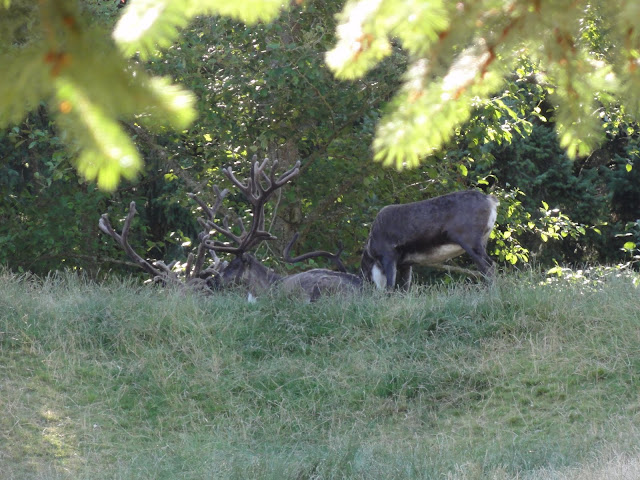 Do those look tiny to you?

That was about it for the Arctic.  On our way back through the zoo, we hit the desert.  If I'd been willing to stand in a line, I could've ridden a dromedary camel: 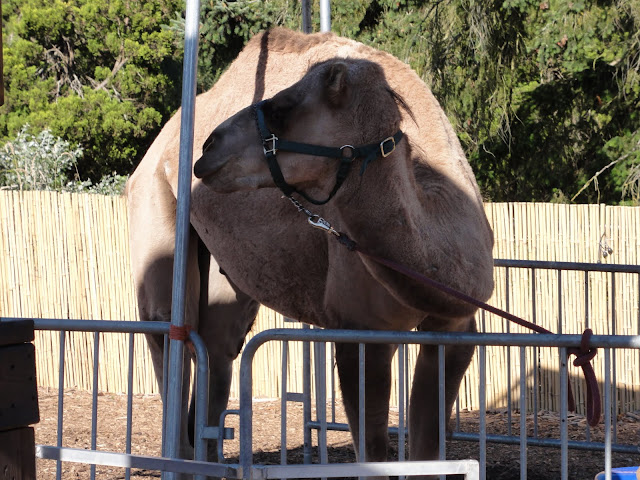 Maybe if they'd been Bactrian.

We hadn't intended to, but the Asian Forest Sanctuary turned out to be the easiest way to get to an exhibit we'd overlooked, so we passed back through it.  A lot of the animals who'd been dead asleep when we first came by were now up, including the tapir, which had been lying so still I'd initially mistaken it for a boulder: 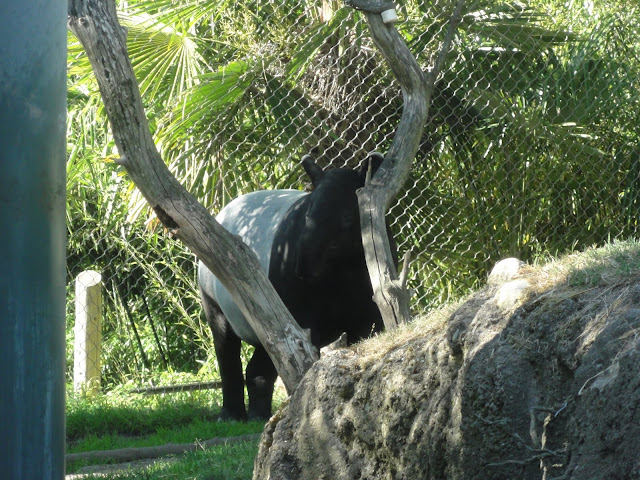 We got a very good look at one of the gibbons, too, who'd emerged from the hammocks and was exploring the creek: 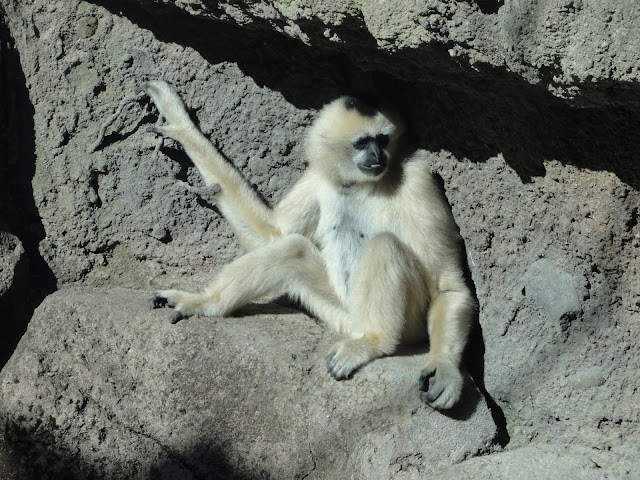 That, I can tell you, is a white-cheeked gibbon.  What's more, I know she's a mature female.  Part of the reason why I know she's a she is because she's white.  The other part has something to do with the kiddies getting a good demonstration of where gibbons come from.  Not that they knew what was going on.  Parents are just not prepared to calmly and matter-of-factly explain why one gibbon's bouncing on the other.

Besides, the clouded leopard not still pining for more cuddles was busy showing off why your furniture would not survive should you make one your pet: 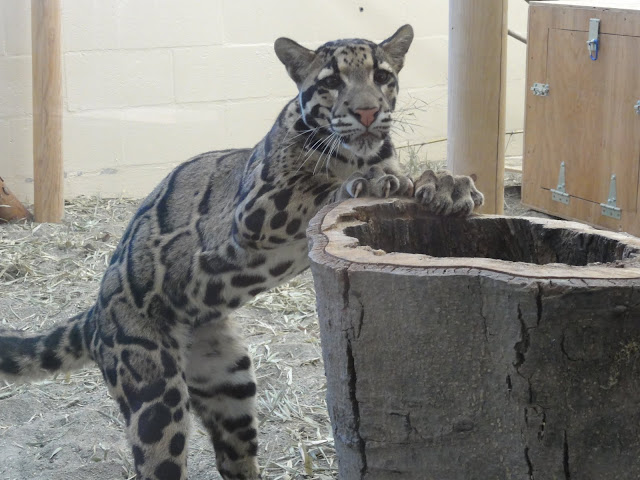 My cat only thinks she's equipped like that.  My furniture laughs at her.

Mama tiger was out showing off her cub, who wasn't having any of it: 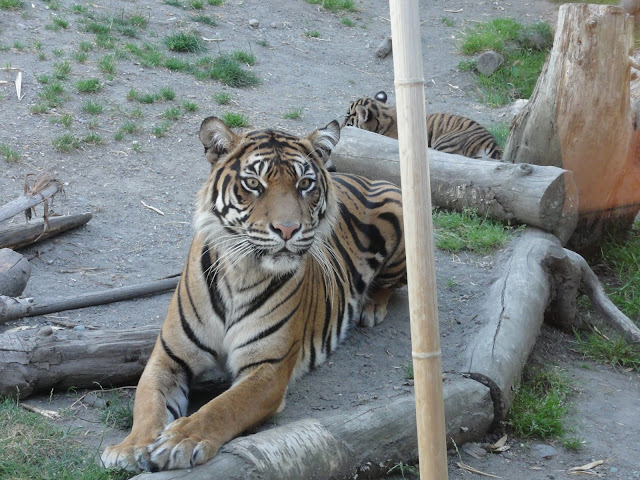 He or she was far more interested in further lazing about: 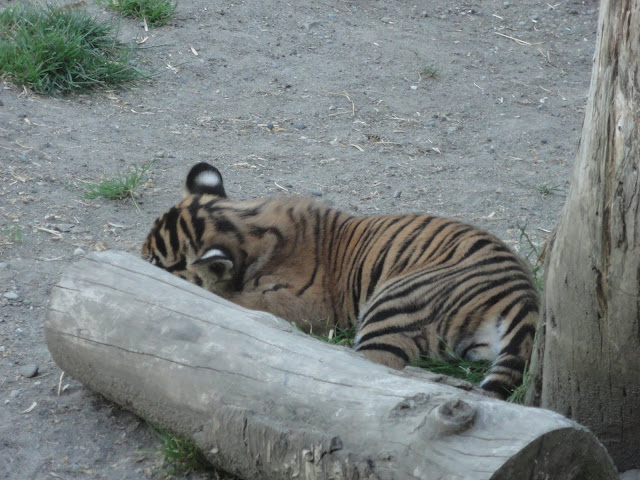 Mama, I believe, was window-shopping, because she got very excited about the kiddies watching her a bit later, stalking up and down in front of the glass as if trying to figure out how to get past the barrier and bring home the tasty human flesh:

Yes, my cat is definitely descended from such creatures.

I know what you're thinking.  Tigers and bears and muskoxen, oh my, but a zoo just isn't a zoo without elephants.  Did you think I'd disappoint?  Did you think I'd fail you?  Oh, ye of little faith!  I've got yer elephas maximus right here: 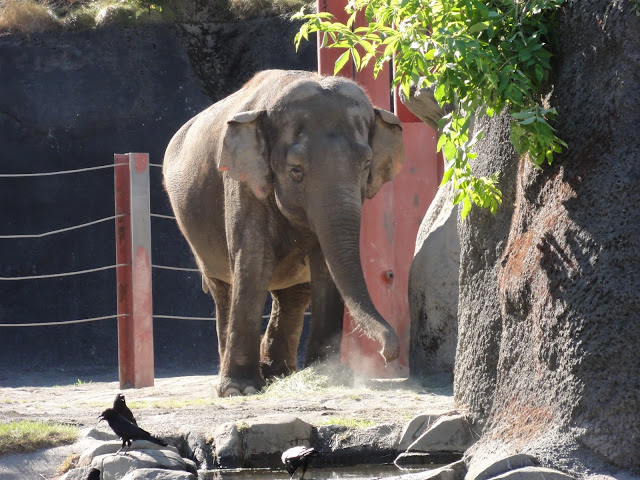 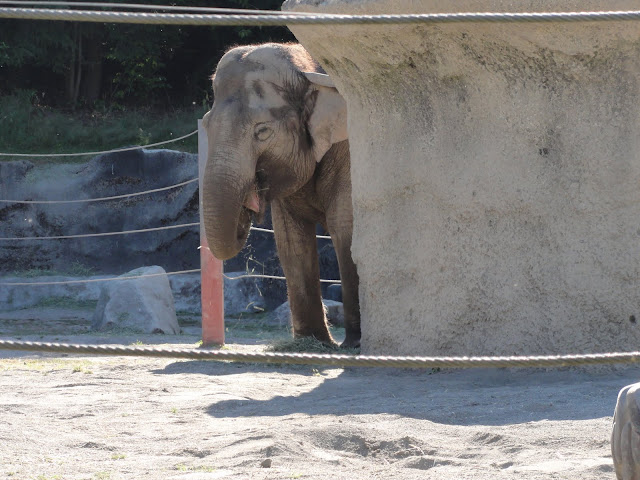 But at the end of the day, the place goes to the birds: 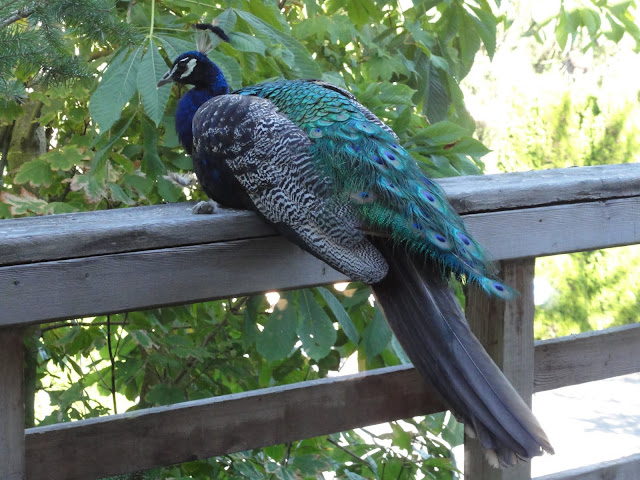 After the zoo, we were ready for some nice beach, so we headed down to Owen Beach.  I've not been in this part of the South Sound for years.  Mount Rainier is on full, glorious display down there, too: 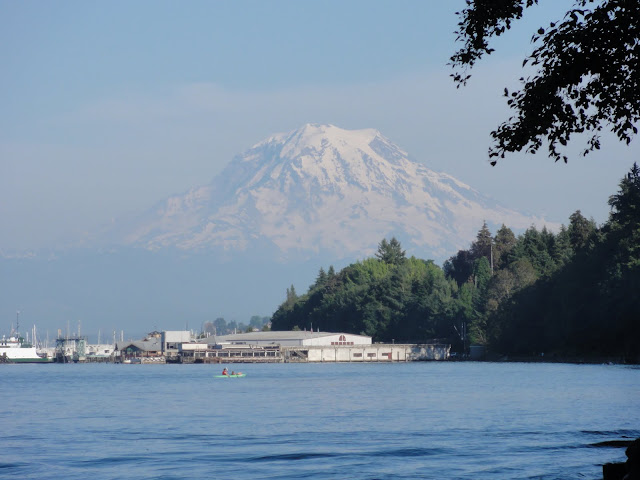 So of course I had to have my picture with it.  My long-suffering intrepid companion obliged: 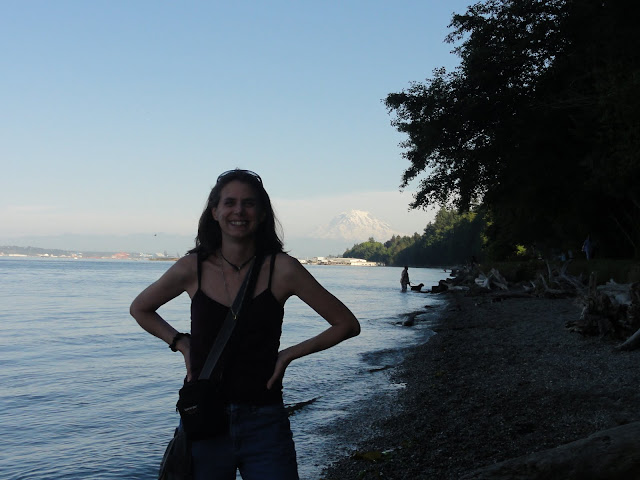 Since the point was blocking the sun, it took a lot of fiddling with settings and flash to get any sort of balance at all.  I can't believe he put up with it, but he did.  And he even agreed to shoot me knee-deep in the Sound: 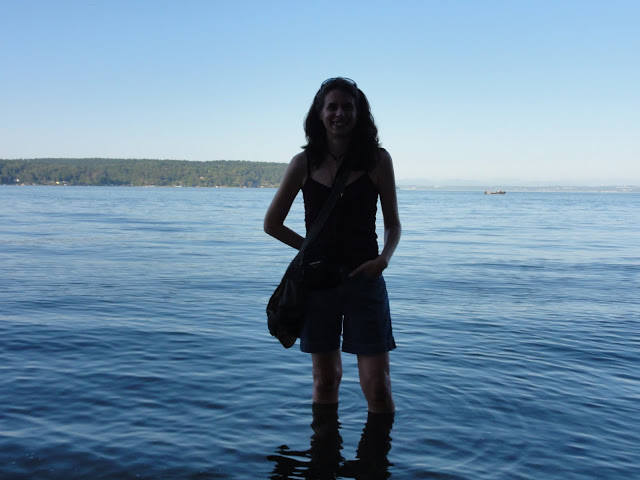 It's one of those pictures I shall turn to this winter when it seems like going outside was a cruel dream.

At the end o' the day, I drove home round sunset, and found myself frantically pulling off the freeway to catch Rainier blushing: 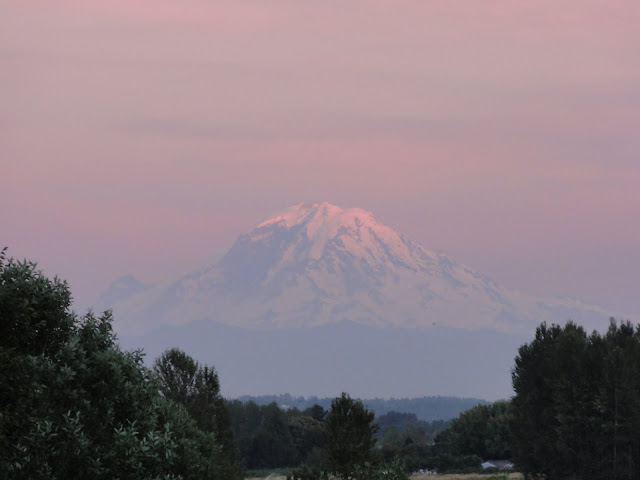 And that, of course, was the perfect end to a perfect day.
Posted by Dana Hunter at 2:53 AM

I'm taking a break from working on my thesis, and what do I find but more gorgeous Dana-Pics! One of the world's most imposing mountains, lots of kittehs, and other interesting critters... what a nice break! I shall go back to writing now with a happy heart.