Zootastic No. 1: ZOMG It's a Cuttlefish! and Other Sea Chanteys

The problem with going to a zoo like Point Defiance Zoo and Aquarium is that there's so much to see.  You careen from one adorable animal to the next, end up with 50,000 photos, and then have to pick the best of the best when every single one makes you squee.  We're going to have to divide everyone into groups.

We'll start with the aquarium bit, because it's rather a nice continuation of our marine mammal molestation theme, and also because this is the first time I've come face-to-face-tentacles with an actual cuttlefish: 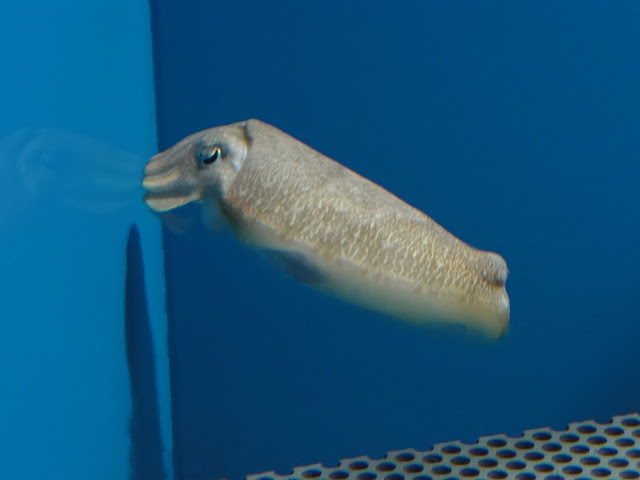 Okay, so that's more of a side view, but still.  THEY'RE SO CUTE!!!  I never truly realized just how adorable they are until I saw this little dude just hanging out in his tank.  I feel guilty now for all those cuttlebones we gave our budgies.


This was also my first encounter with blind cave fish.  Let me tell you something: the little buggers don't know how to hold still for a low-light photo op.  This was the best I could do: 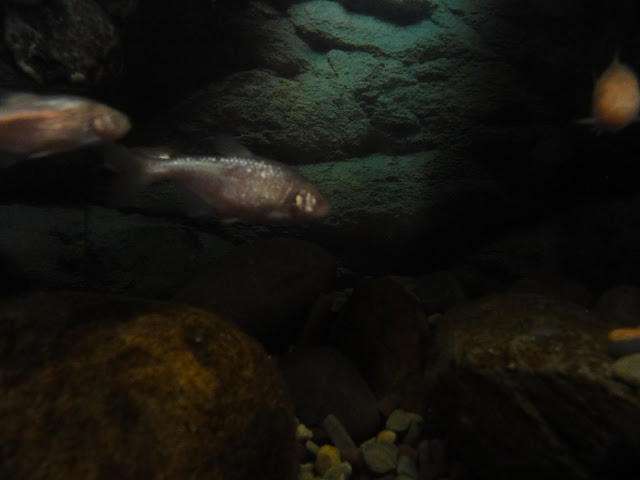 They're really incredible little critters.  They also reflect a flash something fierce, so when my intrepid companion pointed out that, y'know, being blind and all, they probably wouldn't mind the flash setting, the results were even worse than this.  Ah, well.  I remember how shiny and sparkly and utterly eerie they were, and you have the general idea.

Here's something that we don't have to hope will hold still: 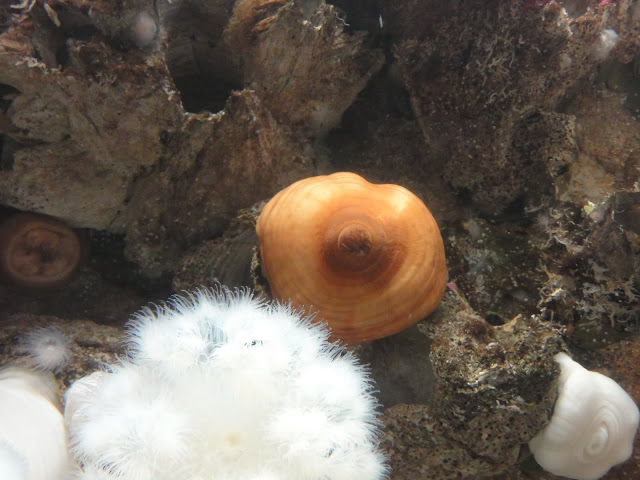 Next up is a rough keyhole limpet, which I'll have you know is no true limpet: 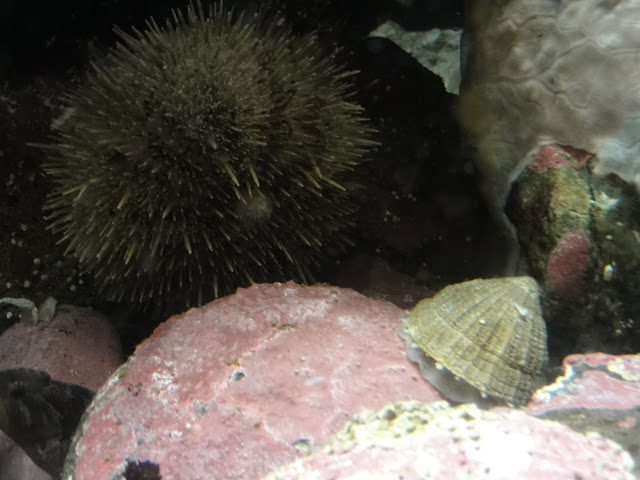 It's more closely related to abalone.  And it's carnivorous.  That's probably something the urchin it's sharing the tank with isn't too concerned about.

The aquarium has a huge circular tank in which various and sundry local sea creatures hang about, complete with wrecked boat: 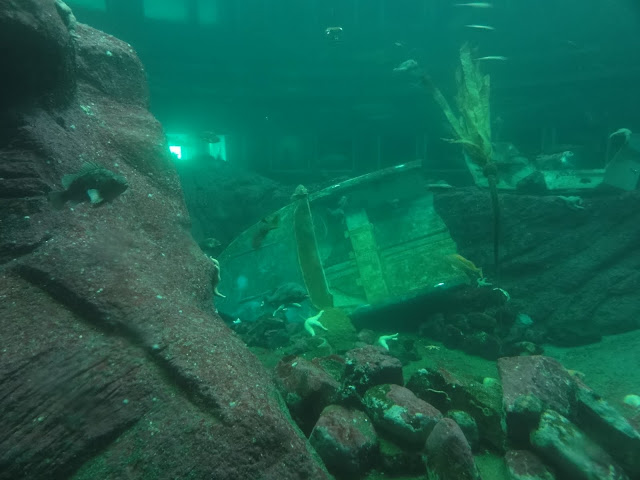 It's like that tank you had as a kid, only on a massive scale.

We actually have some fascinating critters hanging about under the waves round here.  Take the Red Irish Lord and the Cabezon (I think): 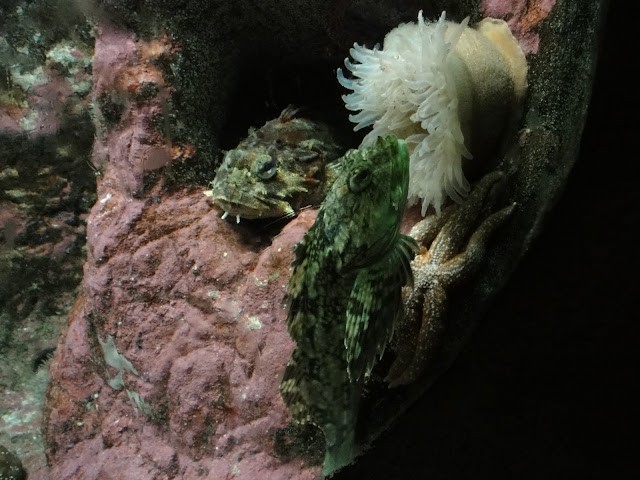 Actually, these are probably both cabezons, but I'm no expert.  Both of them are wild-looking.  Who sez you have to go to a coral reef to get the really awesome fishes?

And the world's fattest starfish (or at least the fattest one I've ever seen IRL) lives right here: 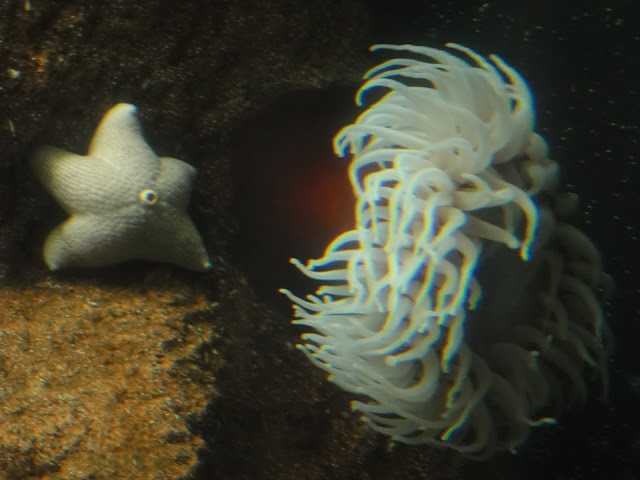 I wonder if the other starfish made fun of him as a kid?

I have no idea what this is, because it doesn't match any of the things on the informative signage, but it's too odd not to include: 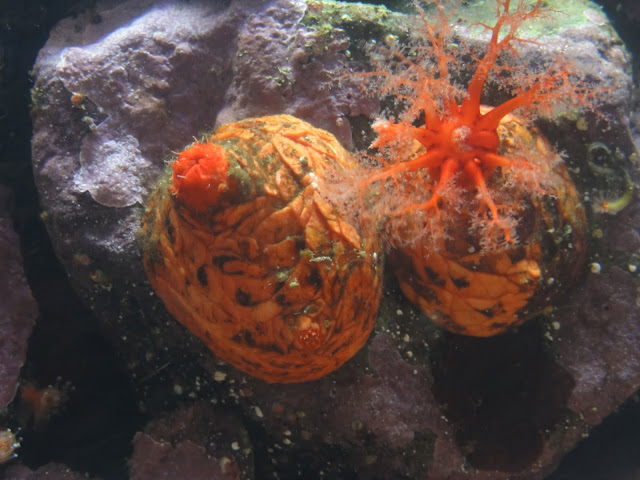 Barnacle?  Coral?  No idea.  And the fact that these things are so hard for me to puzzle out certainly gives me new respect for those folks who originally arranged these things into orders and families and so forth.

This one's easier.  I'm reasonably sure it's the rock scallop, with a nice entourage of strawberry anemones: 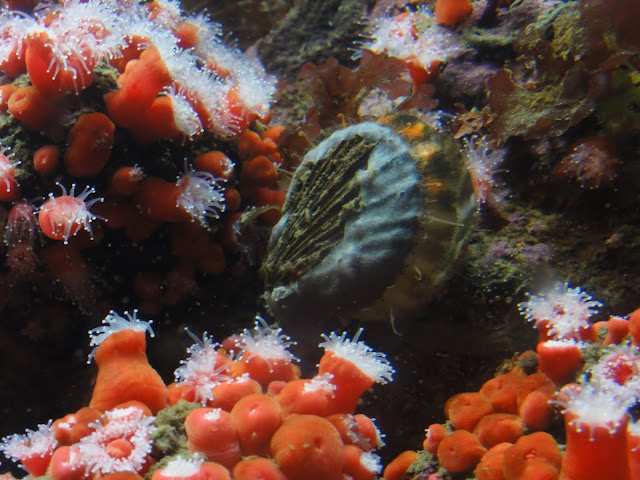 And here's another, the rather cheerful-looking spiny scallop: 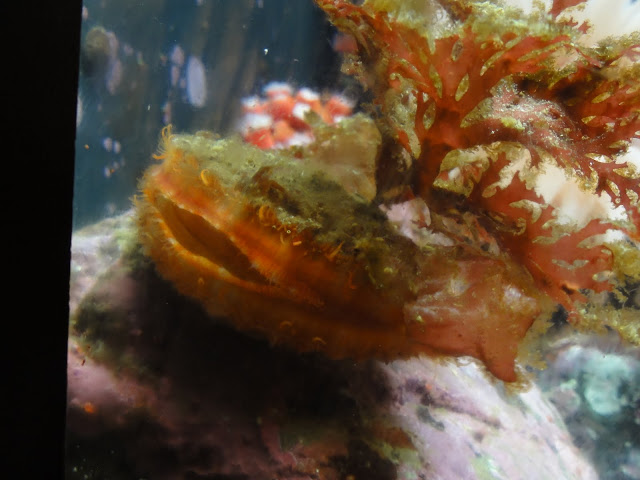 Now I feel a little bad about the seared scallop chowder.

Next up: the hooded nudibranch, a predatory sea slug: 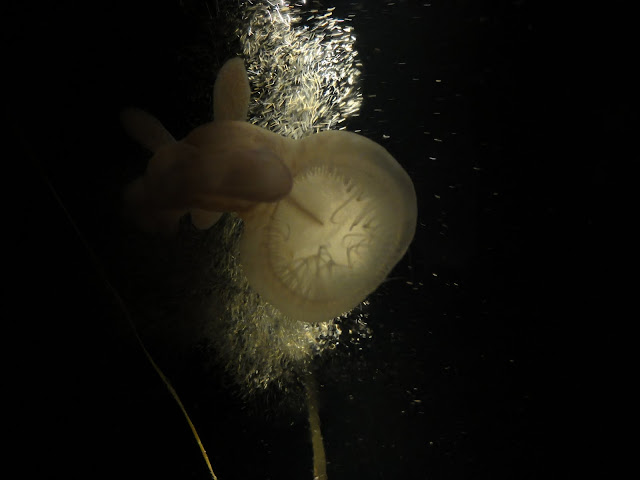 And that's all we have time for tonight, kids.  We'll continue with the sea creatures tomorrow, shading our way towards land mammals.  Best to ease oneself in to these things, eh, what?
Posted by Dana Hunter at 4:00 AM

Hello Dana, thanks for an impressively diverse variety of bloggity goodness this week. But are you sure that's a giant acorn barnacle? Looks more like a mollusk than a barnacle, to me, and all the photos I can find online, for comparison, seem more rough and angular.

Cool, cool pics! I love aquariums, but the ones closest to me are icky drives away. I envy you.

Huzzah! My picture posting was not in vain! Glad you like them, my darlings.

It's all beautiful, Dana, and you shouldn't worry if I'm a bit obsessive about marine taxonomy. I spend most of my days writing code to analyze evolutionary patterns, and the highlight of my year was getting out, for the first time in my genome bioinformatics career, to collect specimens in the field. (Amphioxus, the shyest inch-long cephalochordates you ever saw.)