Aunty's showed up just in time for the 4th of July, as she usually does, and so there shall be nothing more adventurous this weekend than sitting hunched over near my bedroom window attempting to catch a glimpse of a few stray fireworks.  Woot, right?  But at least I'm able to revisit adventures past, and thanks to my trusty Sony Cyber-shot, you're coming along.


Last Monday, after the planes, we visited the Sound.  Lincoln Park's just a few short miles away.  Like many parks around these parts, it has interesting rocks.  I encountered one almost immediately upon hitting the beach, which meant the beach got neglected: 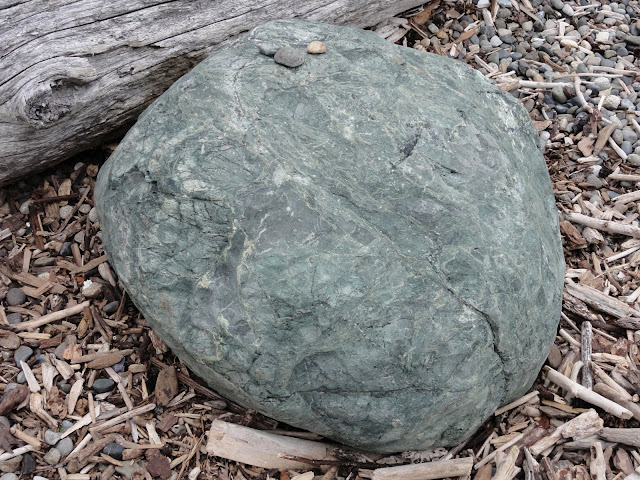 I have no idea what it is.  Even close inspection hasn't enlightened me: 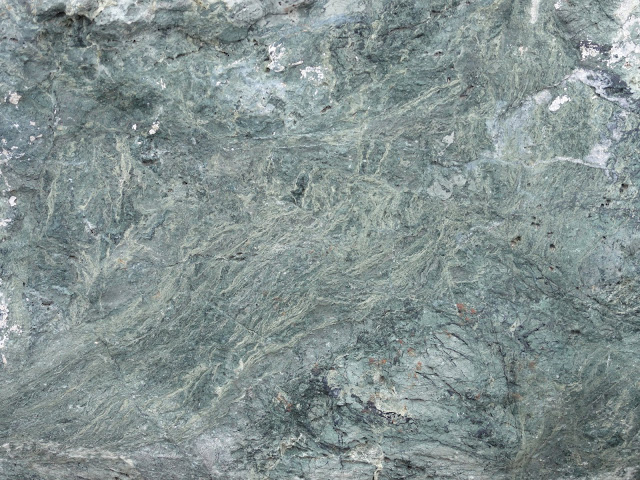 Since I'm tired of looking at interesting rocks and having no idea what they are, I'm thinking a geology course is in order as soon as I can find a suitable one nearby.

Eventually, I tore myself away from the huge interesting green boulder and noticed there were some huge mountains peeking out through the clouds: 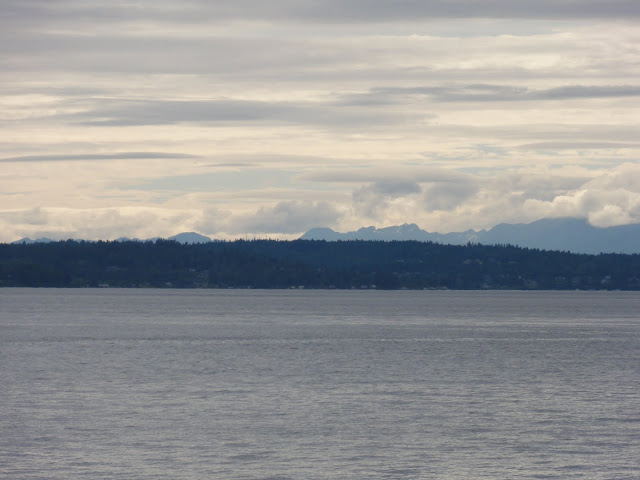 Those I can identify.  They're the Olympics.  And on a clear day, this view has got to be spectacular.  I'll be going back.

There was a lot of driftwood on the beach.  And we got to see just how it's getting there: 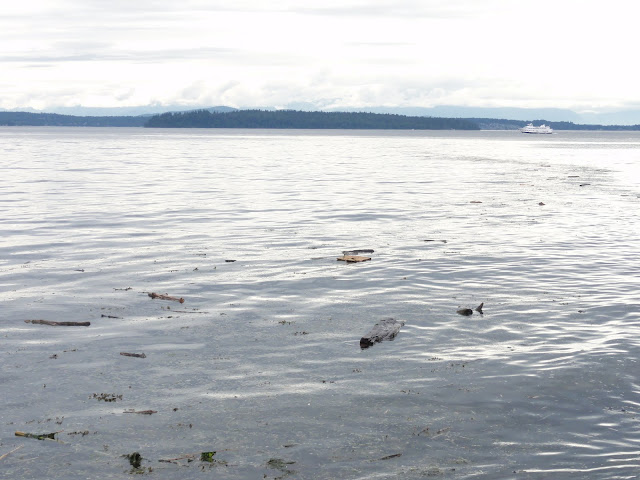 Total river of driftwood, meandering across the Sound.  It says interesting things about the currents, and I wish I could understand its language.  Perhaps a course in oceanography will be in order, too.  I hope there are field trips.

Later, we got a slightly bigger peek at the Olympics: 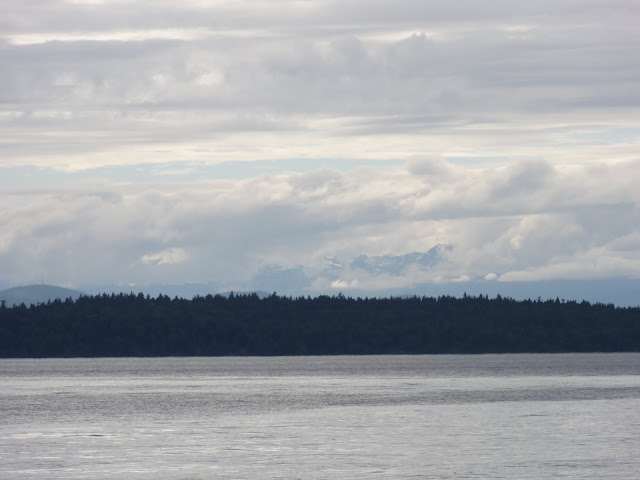 And more interesting rocks.  Here we have a chunk of something (basalt?) with some interesting mineral encrustations: 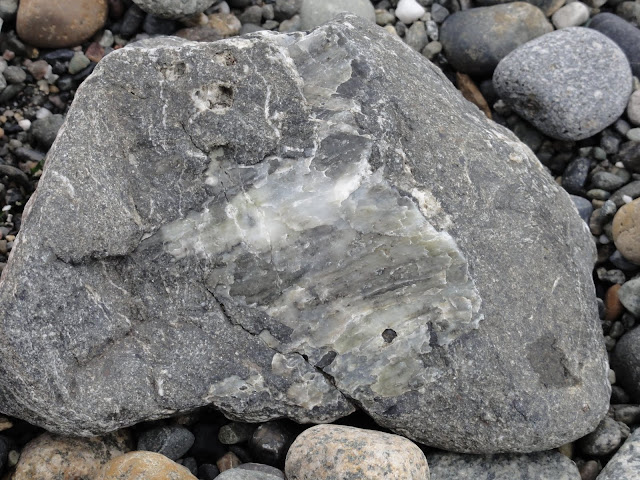 Really really need that geology course.  Whatever it was, it was purty.

And remember when I mentioned lotsa driftwood on the beach?  I've gotcher driftwood right here: 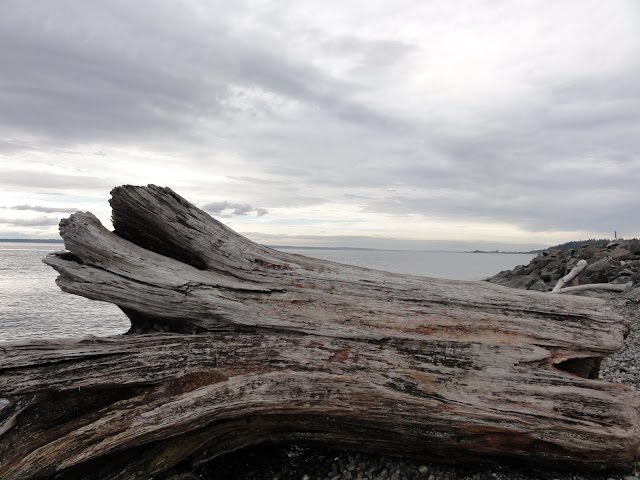 More like a drift tree, really.  It was very nearly taller than I am, and I'm not a short woman.  It was a great place to clamber up, perch, and watch the Sound whilst talking to my best friend on ye olde cell phone: 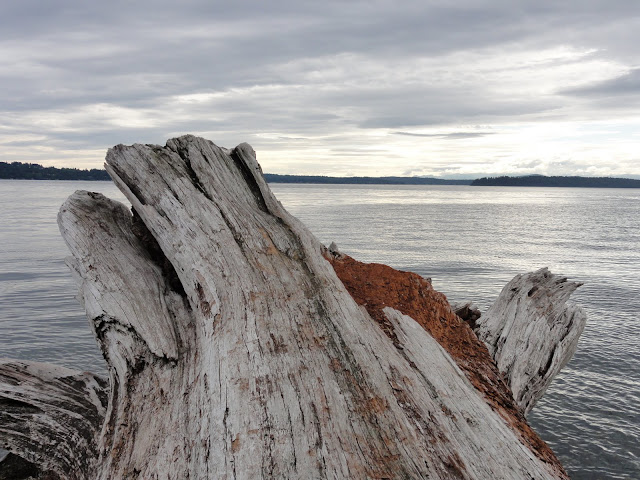 Bits of it are decaying into soil, but the rest of it feels like it plans to be there for several centuries.  I hope so.  It was a friendly place to perch.

Speaking of really ginormous things, here's one of the ships that wanders the Sound: 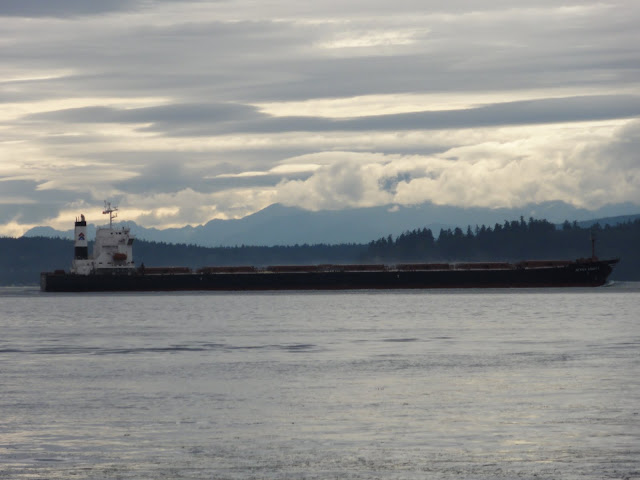 And, total shocker, another interesting rock: 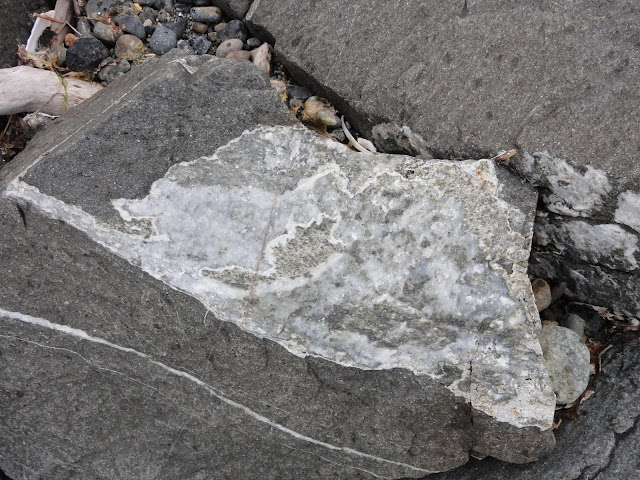 If I'd had a front loader and a truck, I'd have a very well-decorated porch just now.  It was tough enough just limiting myself to a (large) pocket full o' pebbles.

Lincoln Park is right by the Fauntleroy Ferry terminal, so you can watch the ferries come and go.  Here's a ferry with a sailboat: 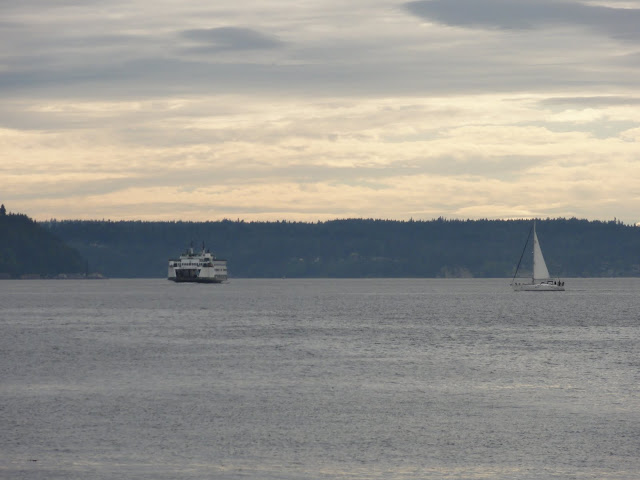 On down the beach, I came across a barnacle-encrusted driftwood log.  Page Charles Darwin, stat! 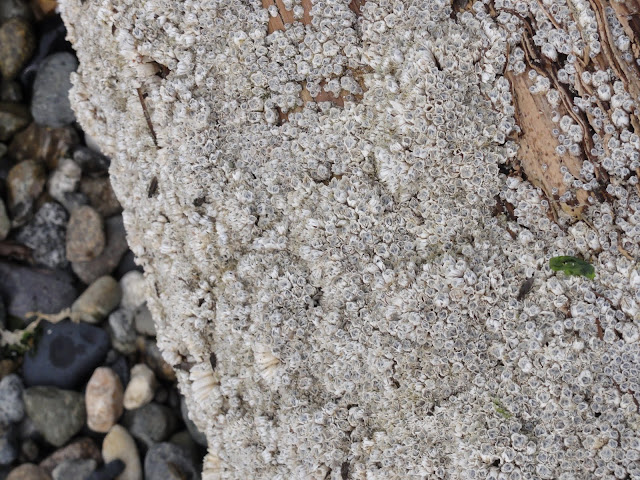 So that's what sailors gripe about.  Can't say as I blame 'em.  Those look like they'd be tough to scrape off.

Seattle's got plants everywhere, taking advantage of every single toehold they can find.  Here are some flowers making a rather drab wall all artsy: 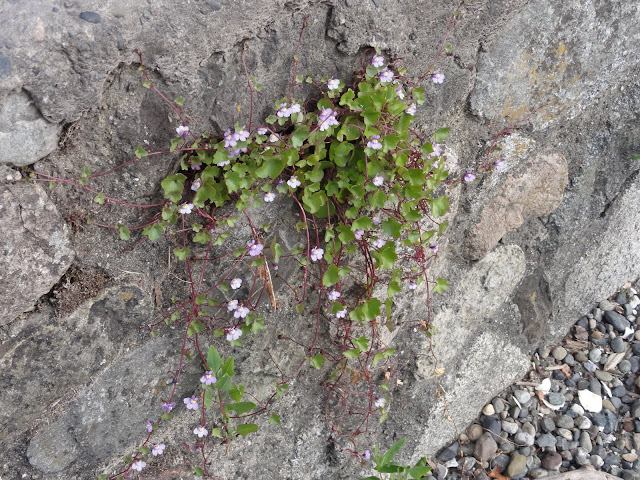 Later, I stumbled on this bit of driftwood that seems as obsessed by rocks as I am: 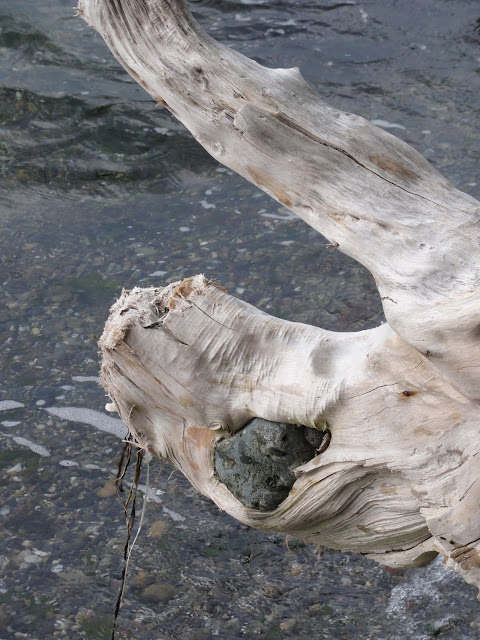 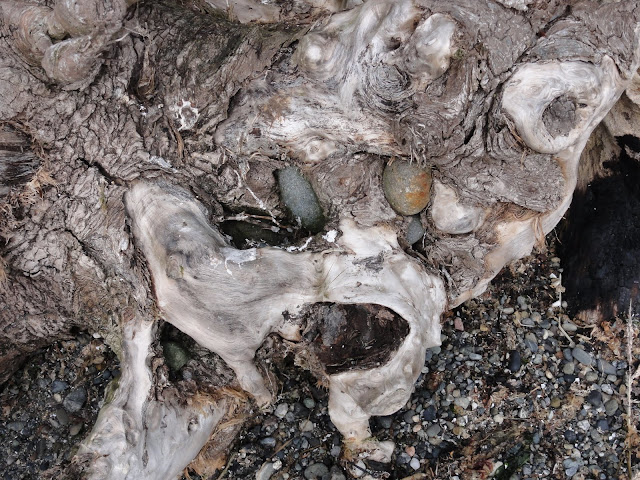 It had rocks clutched tightly in several places.  Some looked like they'd been wedged there by the waves, but it seems it grew around at least a few of them, and refused to let go when uprooted.  I understand how it feels.

Eventually, we waved goodbye to the beach and headed out for dinner.  Of course, not two minutes after we left the park, the sun came out.  Welcome to Seattle.  It was pretty much gone by the time we left the restaurant, but we had just enough light left to go visit Cujo's basalt: 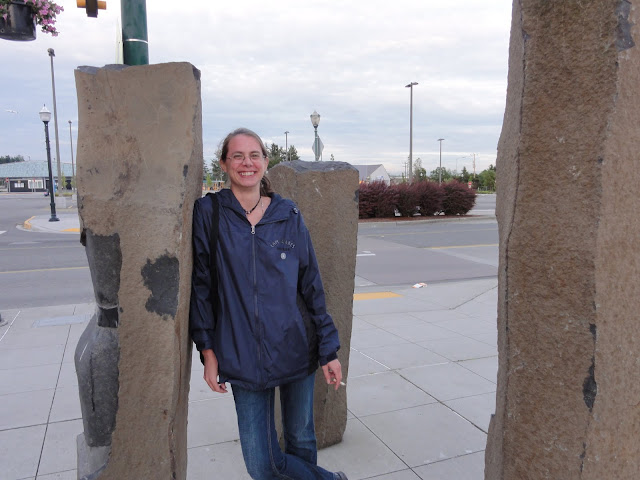 Some artist has hauled a bunch of basalt columns to town, carved bits and pieces of people and creatures in them, and then bunged them in Burien.  Cujo found this stuff when he was wandering around in search of a burger, and when he told me about it, well, of course I had to see!

On the way home, I hit sunset proper at Bellevue, and it was surreal.  Nothing quite like a powerful sunset behind a bunch of lovely skyscrapers.  Alas, I was on the freeway, and couldn't get off in the most artistically optimal spot, but I got a few pretty shots: 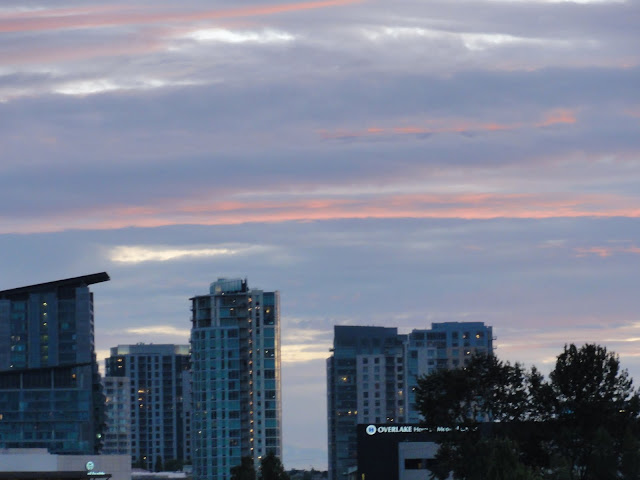 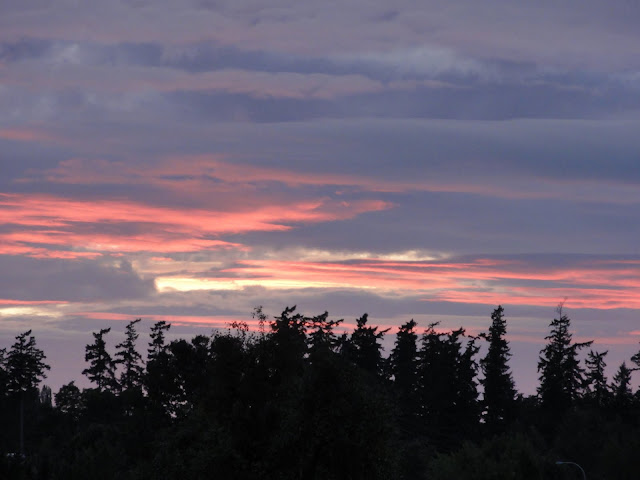 And that's that.  At least until the next adventure...
Posted by Dana Hunter at 3:14 AM

great photos dana and now i wanna know what those rocks are... let me know what ya find out

It's really tough to be sure from photos, but your green boulder looks like serpentinite. The basalt (if you say so; it looked more like andesite to me) appears to have the remains of an intrusive quartz vein attached to it.

Quartz is deposited in veins wherever hot water can squeeze up through the cracks in rocks. I've seen veins so small you need a microscope to spot them; the largest vein I've seen, in the Sierras, was about 2 meters wide. And my experience is very limited.

In the first picture of your driftwood tree clutching a rock, the rock looks like conglomerate. I couldn't tell in the other picture.

And yes, you should take a geology class! You'd love it! Don't know about other states, but here in California the state university system requires a certain number of upper-division science units for non-science majors. These aren't dumb-downed classes, they just don't require a lot of background, and the general public can take them through a program called Open University. You've been teaching yourself enough geology that you're ready for one of these classes. Look around and see if you can find something similar!