In Parte the First, we managed to get so distracted by various and sundry other sea creatures that we didn't make it to the sea mammal exhibits.  But the Seattle Aquarium has got sea mammals, right over there in building two, and we are at last heading for the exit.  We are crossing the sidewalk.  We are wrenching open the door to their exhibit.  And we at last encounter - 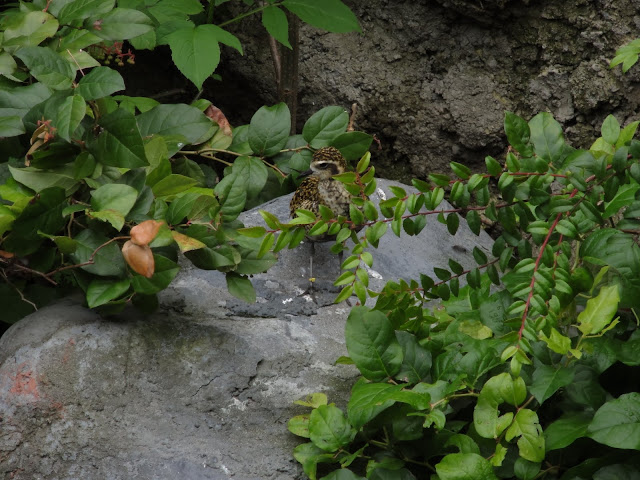 I didn't come here for distant dinosaur descendants.  It was never my intention to inspect the Pacific Golden Plover.  And yet, here we are.  Our cunning plan to molest the sea mammals has gone to the birds. 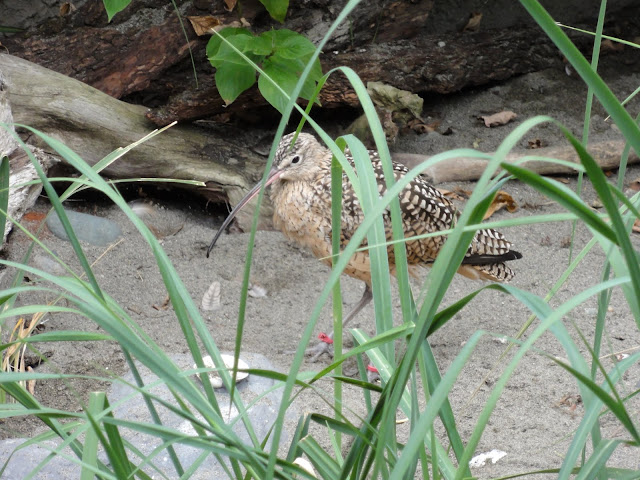 Long-billed is apt.  Long-billed is utterly correct.  That is a long fucking bill, and it's got to be the terror of every crustacean, arthropod, and occasional egg this bird encounters.

Further along, we encounter the black oystercatcher, also aptly named: 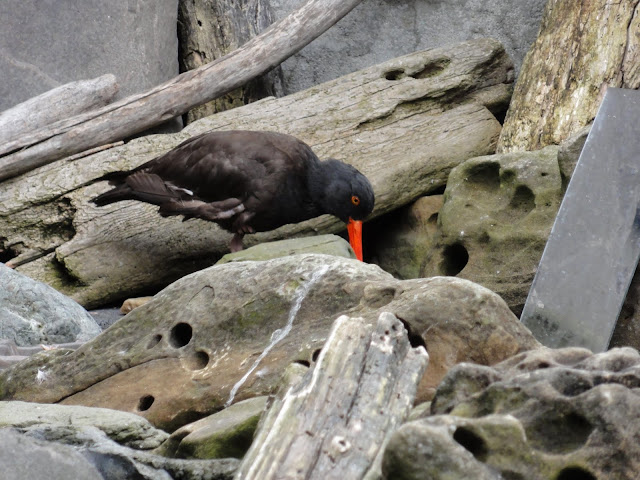 Well, somewhat aptly named.  It is, indeed, fairly black, but the sign assured us it's more a mussel and limpet catcher.  So it goes.  A lot of things bear names that only tangentially relate to them.

I'd show you pictures of the tufted puffins, common murres, and rhinoceros auklet, but the little bastards had splashed water all over the glass barrier.  I did get good video of some of them, so we'll have that up once I've got the medley done.  In the meantime, we'll just move on to the sea mam-

Oh, fuck.  Yet more distractions.  Such as these lovely green anemones: 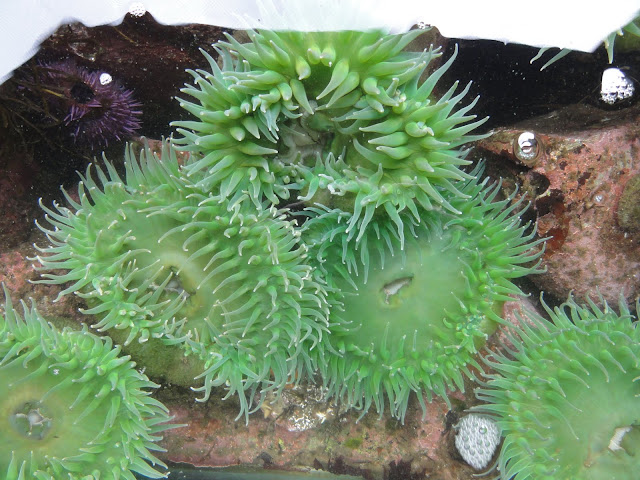 It is hard to explain how jarring they are.  These things look completely fake.  They're that green.  You don't expect that kind of green in nature.  They look like they've been dyed for St. Paddie's Day, and yet there they are, totally natural.

Once you leave this bit of the aquarium and head inside, you're under the Sound.  Yes, that's right.  Under.  There's a huge underwater dome, and all manner o' interesting things in tanks, such as this sailfin sculpin with a decorated warbonnet peeking in: 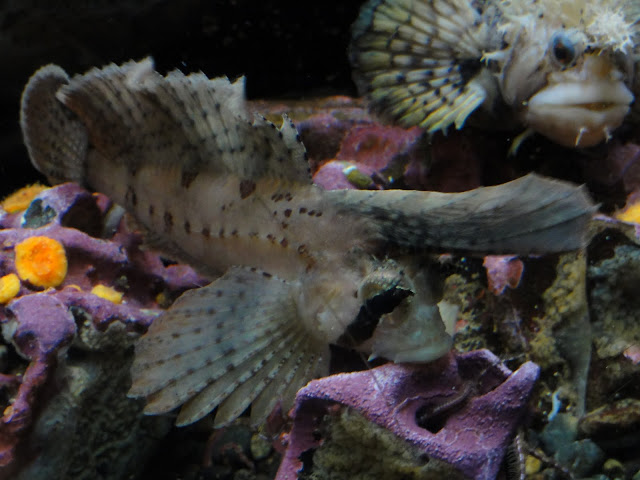 And then there was this fellow, I have no idea what species, but he's darling: 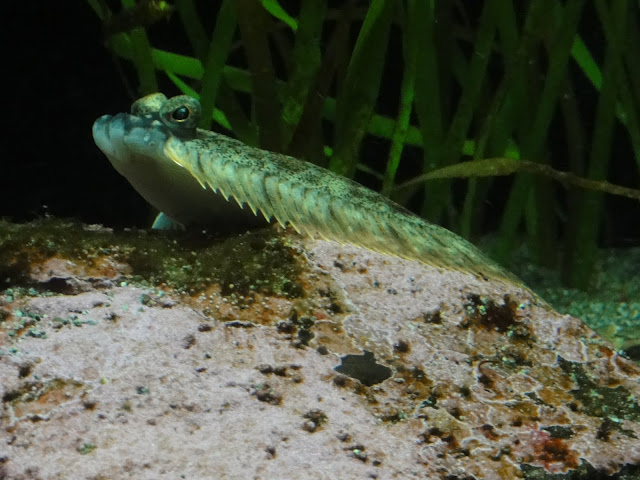 And a wonderful frilly sea cucumber of some description: 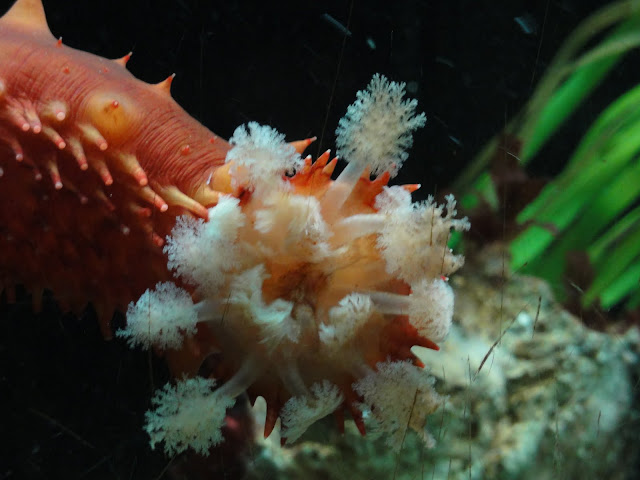 Hard to believe these things hurl their internal organs around in self-defense, but some of them do.  "Do ya want a piece of me, punk?  Do ya?  Here's my stomach!  I'll just go grow a new one."  Odd, odd creatures.

By this time, I was beginning to despair of ever getting to molest sea mammals*.  But then, suddenly, I turned a corner, and there was a northern fur seal doing circuits around its pool!  Zipping round and round, happy as you please.  Too bad it was moving too fast for my camera to capture in such low light, but the video worked (and someday, really, I promise, I'll have a medley put together), and later she came up for a breather. 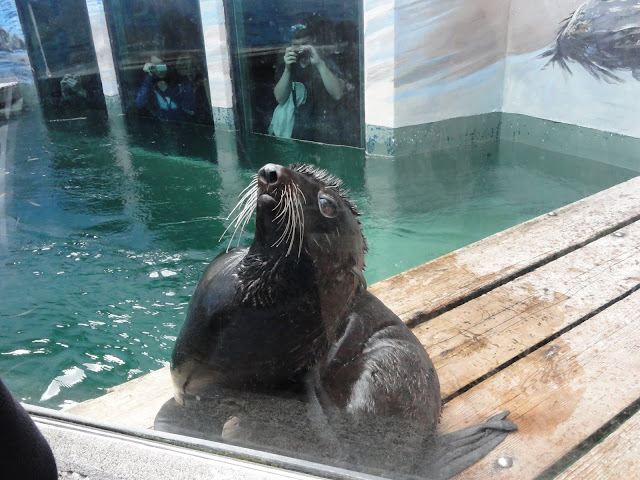 Her name is Woodstock, because she was born during the 20th anniversary of - well, you can guess.

Sea mammals.  At last.  Mission accomplished.  And next door, what do we have but the cutest freaking sea otters in the universe: 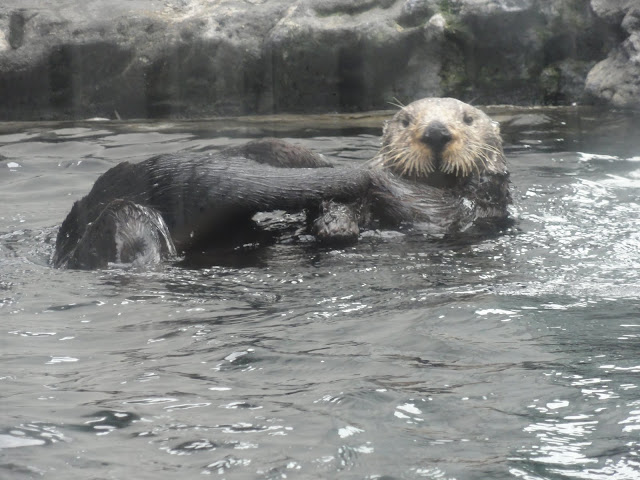 They were swimming and rolling and making waves: 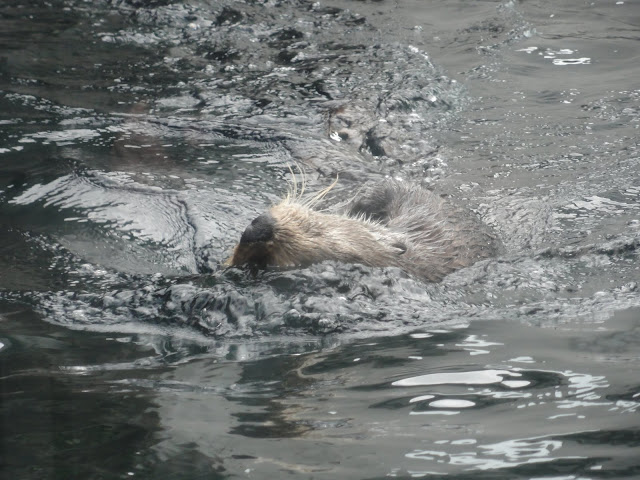 One hid out in his bunker, preparing to launch a sneak attack: 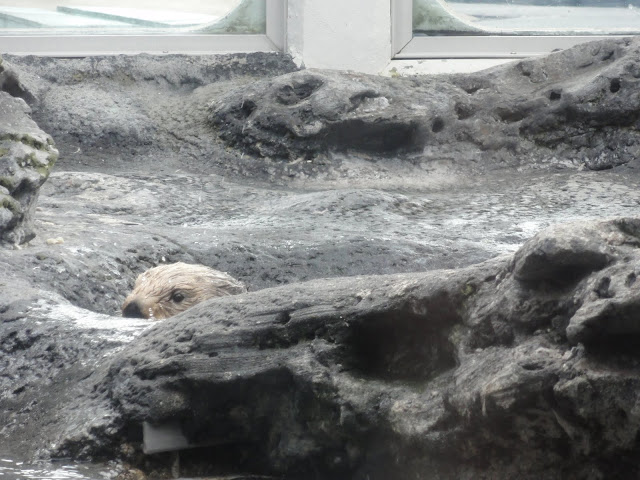 Later, all tired out from playing, they piled up in one big flotilla of sea otter and just drifted round, sometimes lazily stretching a webbed foot: 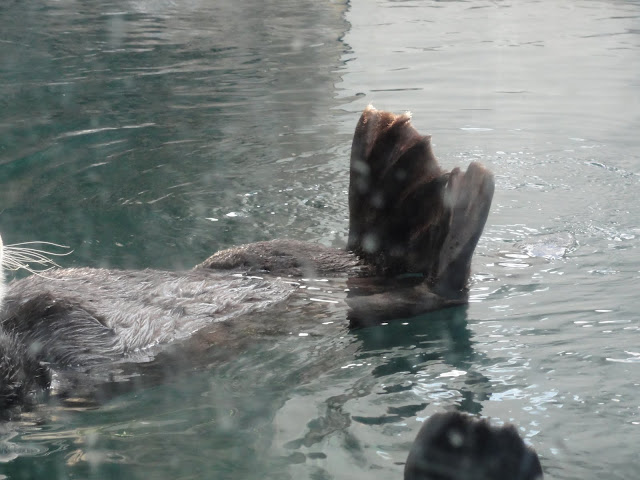 That's evolution, that is.  These are creatures adapting to the water - eventually, their feet may end up looking as strange as the fur seal's, becoming more flipper-like.  They may turn in to flukes.  Or they might just stick with their niche.  Who knows what they might become if humans don't drive them to extinction?

I hope whatever they evolve in to, they'll always stay this damned cute: 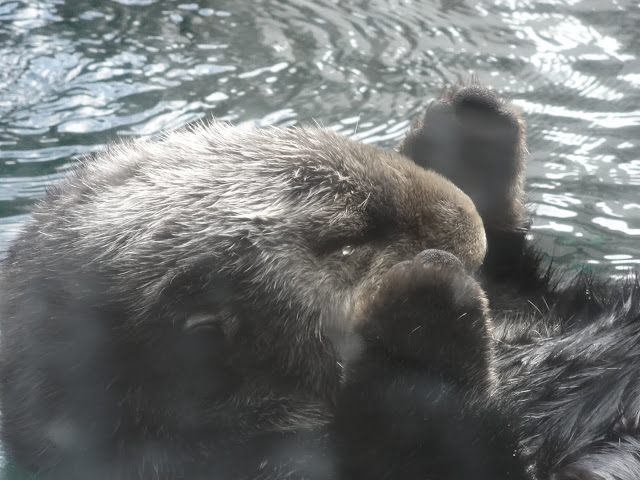 And that they'll always want to spend a lazy afternoon just grooming each other: 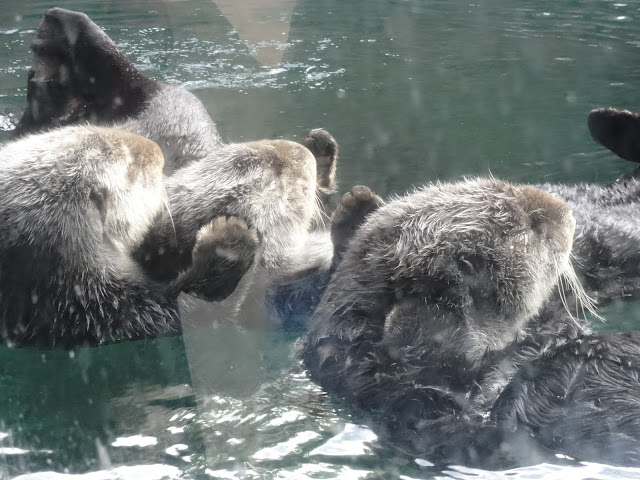 Speaking of lazy afternoons, one of the male northern fur seals had the complete right idea about how to spend one: 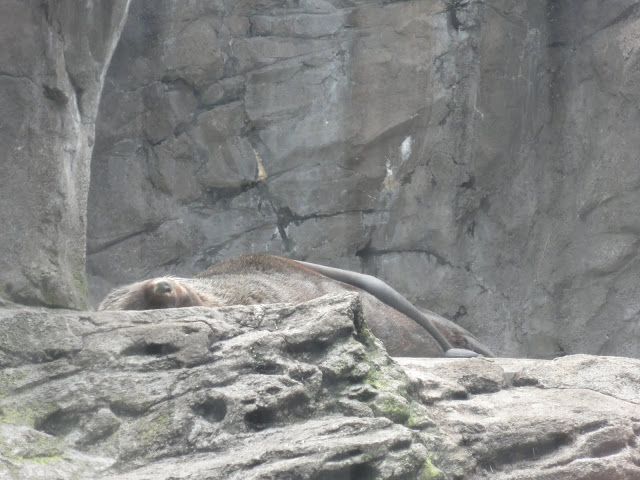 This is either Al or Commander.  I prefer to think of him as Al, because you'd think somebody with a name like Commander would be patrolling the perimeter, which the other was doing.  This is the sum-total of Al's activity for the afternoon: 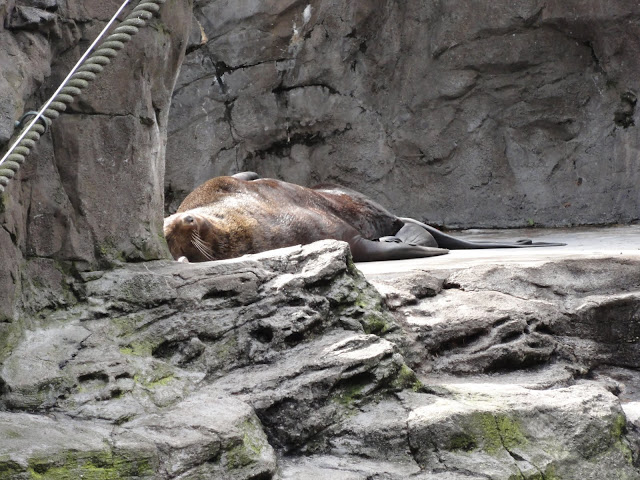 Yup, gotta get that sunbeam on the belly.  And at least he displayed quite a bit more activity than the river otters, who remained in precisely this position the whole time we were there: 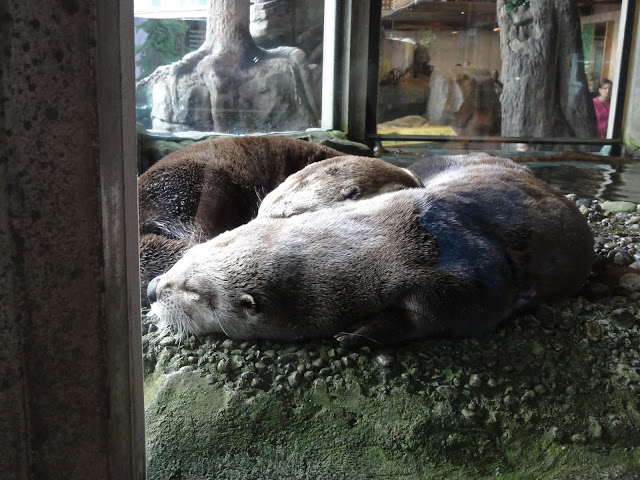 Anyone wondering how adaptable animals are need only visit any aquarium or zoo, where one will find creatures capable of sleeping through any number of children shrieking at full volume.  Maybe it's the seagulls that prepare them for it.

After a long afternoon exploring the aquarium, it's a temptation to curl up in a pile with river otters, or float lazily on your back with sea otters licking your head.  Alas, this is the closest I got to doing either: 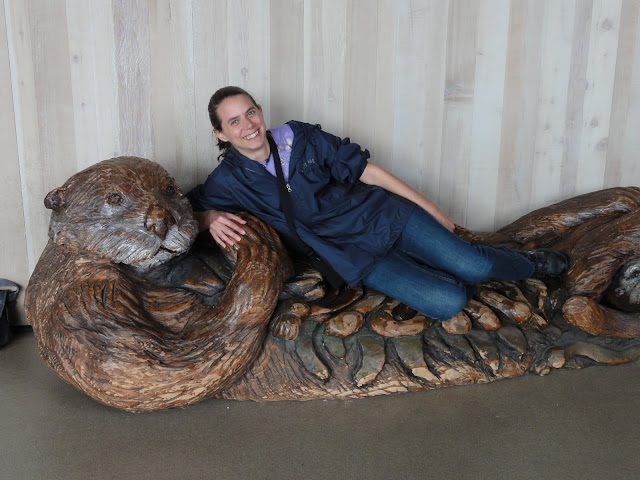 Somehow, it just wasn't the same.  I still thank my intrepid companion for indulging me, and patiently waiting while the kiddies cleared out so he could take an unobstructed shot.

After a siesta with the sea mammals, we had time to find Nemo: 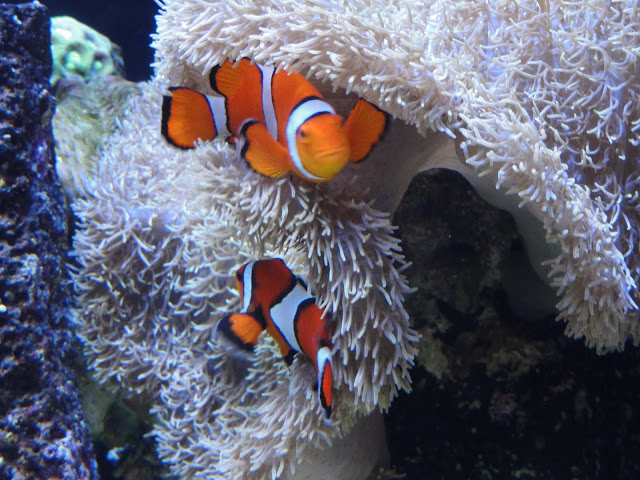 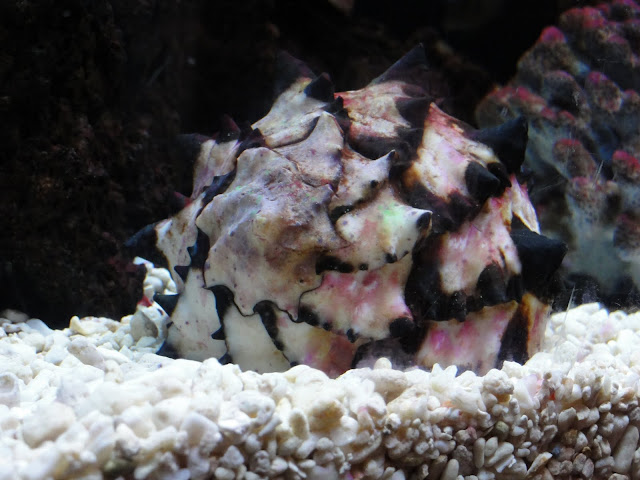 Run into something that looks like an alien from a 50s monster movie: 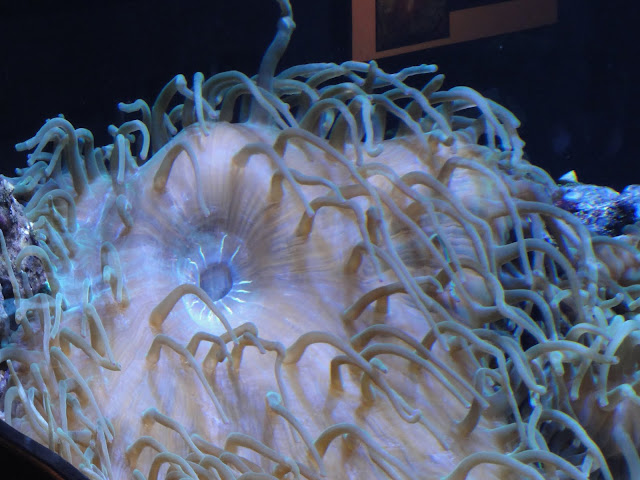 And enjoy some pretty fishies: 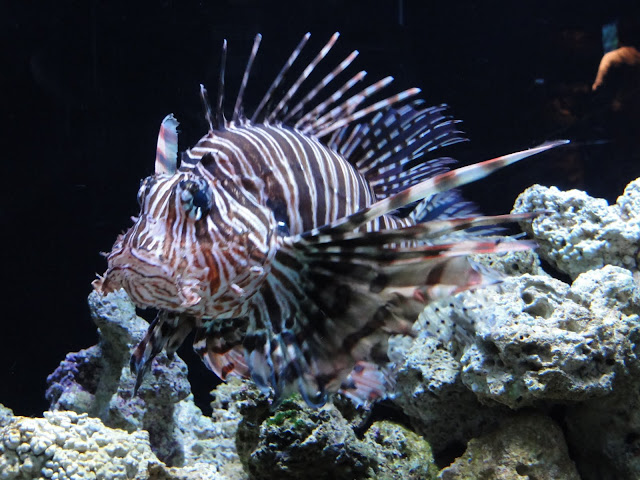 Then it was off home to not eat seafood, because when you've spent the afternoon with sea creatures, it somehow doesn't seem right to munch on their brethren immediately following.

Places like this bring you closer to fellow denizens of the planet.  It's good to get in (sometimes literal) touch with them, learn about them, appreciate their beauty and their place in this world.  We need to take care of each other.  So show your local zoo, aquarium, or wildlife refuge some love, and let your fellow creatures know you care.

*Absolutely no sea mammals were actually molested in the making of this post.  Really, honestly and truly.  Although the temptation to pinch their little cheeks and coo "You're so cuuute!" was very nearly overwhelming, the glass rather got in the way.  And while I really got up Al's nose at one point, it was in a photographic rather than a literal sense.  I have not included the picture, as I am unsure of your interest in fur seal nostrils, but I can email it to you if you like.
Posted by Dana Hunter at 2:45 AM

i am so adding this to my list of things to see when i eventually haul my tushkie up to seattle. under for forking sound!